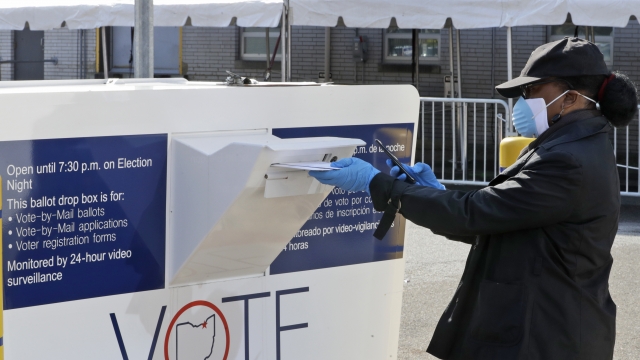 SMS
COVID-19 Puts Voting-By-Mail To The Test Ahead Of November
By Shira Tarlo
By Shira Tarlo
May 12, 2020
Vote-by-mail is one way to conduct a presidential election in November — and the practice is being put to the test well before then.
SHOW TRANSCRIPT

Mail-in voting is one of the leading options the country has to conduct a presidential election in November.

And the practice is being put to the test well before then.

From statewide primaries to special congressional elections to local races, election officials are attempting to quickly adapt to voting amid a pandemic.

"How expanded mail-in voting works in the primaries is going to say a lot about its future in the fall. So far, I think the evidence has been pretty good," said David Hawkings, editor-in-chief of The Fulcrum.

Calls for increased access to vote-by-mail gained new momentum in the wake of stay-at-home orders and social distancing guidelines, triggering a fiercely partisan battle amid a public health crisis.

Many Democrats and voting rights groups say vote-by-mail lets Americans exercise their right to vote without fearing exposure to a deadly virus. They warn if states don’t expand voting by mail, millions will be disenfranchised.

"I think that mail-in voting is a terrible thing," President Trump said last month. "There's a lot of dishonesty going on with mail-in voting."

If there were fraud, it would be easier to detect in a local or county election, simply because fewer people vote and fewer ballots need to be counted.

The most high-profile recent example occurred in North Carolina in 2018, when a Republican operative was accused of trying to sway a congressional election through illegal ballot harvesting — the practice of collecting ballots to turn them in. That resulted in an election do-over.

"A best practice would be that people can't harvest ballots that have not already been filled in and sealed and signed. That could lead to misbehavior," said Hawkings.

Five states already conduct all elections entirely by mail. Twenty-eight states and the District of Columbia let voters request an absentee ballot without giving a reason they can't vote in person.

And a Newsy/Ipsos found more than half of Americans say the pandemic has made them more likely to support their state allowing vote-by-mail or absentee ballots for all voters.

"Even if there's no mandate to expand vote-by-mail or absentee voting or voting-at-home — those are all relatively synonymous terms — there's obviously going to be a record number of people using this method this year because of the virus," said Hawkings.