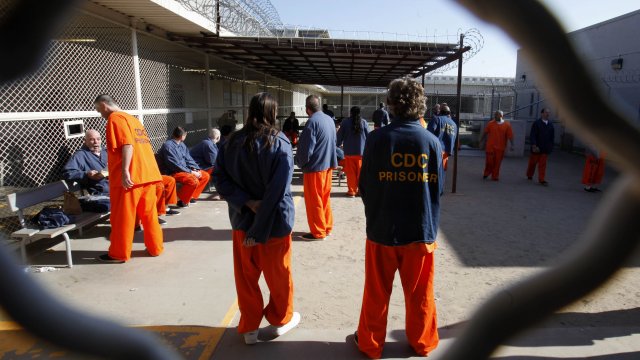 SMS
COVID-19 Is Forcing Cities Into The Future Of Criminal Justice Reform
By Jamal Andress
By Jamal Andress
April 8, 2020
There have been thousands of low-level, at-risk offenders released in cities such as Cleveland, Chicago and New York.
SHOW TRANSCRIPT

As a result of this growing coronavirus outbreak, the notoriously tough on crime Attorney General William Barr is ordering the Bureau of Prisons to release at-risk inmates to home confinement. So far, 566 inmates have made their way home.

The order was issued two weeks ago, and now more than 195 federal inmates have tested positive for the virus. At one facility in Louisiana, 5 inmates died from COVID-19 in just 7 days.

Similarly, there have been thousands of low-level, at-risk offenders released in cities like Cleveland, Chicago and New York to try to avoid an outbreak of coronavirus in their respective facilities.

JAMAL: "I'm wondering, having watched this outbreak, which is obviously tragic, spread across the country but having also seen along with that, these major changes In regards to releasing folks from prison, these digital hearings that you mentioned, things of that nature. What has been your reaction watching those things take place across the country?"

Brooklyn District Attorney Eric Gonzalez's office has been making daily recommendations to New York judges on who should be released from jail, handling cases via virtual courtroom appearance and declining to prosecute several low-level offenses all to lower New York's incarcerated population.

GONZALEZ: "New York has come a long way. We thought we had done a lot up to this COVID emergency. Now looking at COVID and just seeing all the things we're doing in addition, now you have to go back and say, 'if we could do that today, why do we need to go back to what it was even a few weeks ago?' I think and I hope that this will be the new norm."

In a New York Times op-ed Gonzalez called on Governor Andrew Cuomo to release detainees who were locked up because of "noncriminal technical violations of their parole." At Rikers Island, one of those offenders tested positive for COVID-19 and died over the weekend.

In California, the threat of an outbreak behind bars has not only led to mass commutations across the state, but the government leased hotel rooms for recently released prisoners.

Tulsa County Jail in Oklahoma has dropped its jail population 15% in just 10 days after local public defenders petitioned for their release.

ASPINWALL: "They went ahead and got the prosecutors in Tulsa County to cooperate and some judges to sign on and have like a huge expedited docket that week where they could have like really quick hearings for these folks and say, OK, this person is a threat to public safety or this person isn't."

Journalist Cary Aspinwall covered criminal justice in Oklahoma for years. She now works in Dallas, Texas with the Marshall Project.

ASPINWALL: "I think it's always heartening when you see these parties who are opposing each other in court on a daily basis, the prosecutors and the public defenders and the sheriffs, those kind of things when they're not always after the same goals and in every situation, but I think in this situation to see them working together well, in the interest of public health, that's always heartening."

While cooperation is taking place across the country, the coronavirus pandemic is spreading in prisons and jails, and spreading quickly. In Chicago's Cook County Jail, the number of confirmed cases of coronavirus jumped from one on March 22 to 230 on Sunday.