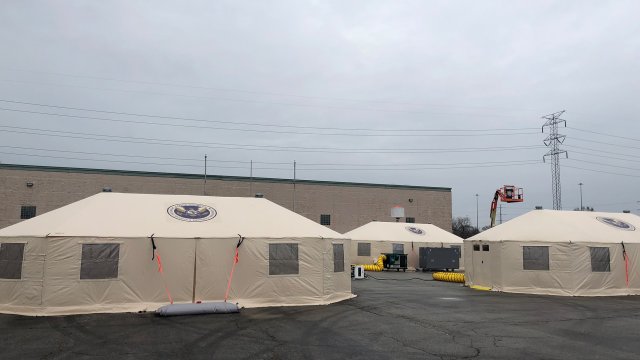 The coronavirus pandemic has exploded at Chicago's Cook County Jail — one of the largest jails in the country which typically houses between 5,000 and 6,000 inmates. The number of positive cases has ballooned from two detainees and one staff member in late March to more than 250 detainees and 150 staff members today.

According to The New York Times, Cook County jail is the "nation’s largest-known source of coronavirus infections." Fifty-nine-year-old Jeffery Pendleton, who was being held at the facility, is the first detainee to die from health complications due to COVID-19. He died last weekend.

The jail has managed to vastly decrease its inmate population over the course of the outbreak, releasing more than 1,200 detainees. As experts have consistently warned, social distancing is nearly impossible in an environment like jail.

BASSETT: "We know that COVID-19 infects clusters, and … the prison and jail system in the United States represents a setting where there is real concern about a sort of 'dry grass fire' spread of COVID-19 in these settings," Mary Bassett, director of the Harvard T.H. Chan School of Public Health, said.

Ioan Lela is a detainee at Cook County Jail as this outbreak spreads. We spoke with Lela last month for a different story before the jail had any confirmed coronavirus cases. Today, he called to tell us the conditions he's been experiencing behind bars.

LELA: "It's frustrating, stressful, at times overwhelming. … I'm on a deck that's quarantined since people were infected with this virus, and we're still in two-man cells. So we can't social distance."

Several detainees filed a federal lawsuit against the Cook County Sheriff's Office calling for the release of "medically vulnerable” inmates.

In response, the city of Chicago said in a court filing that if too many detainees are released, it could "consume the resources of the city and endanger the health of its residents."

On Thursday, a federal judge ruled against the release of these detainees but also gave the sheriff's office strict sanitation and quarantine guidelines to follow.

According to The New York Times, there are more than 1,300 confirmed cases of coronavirus in U.S. prisons and jails, including more than 30 deaths.