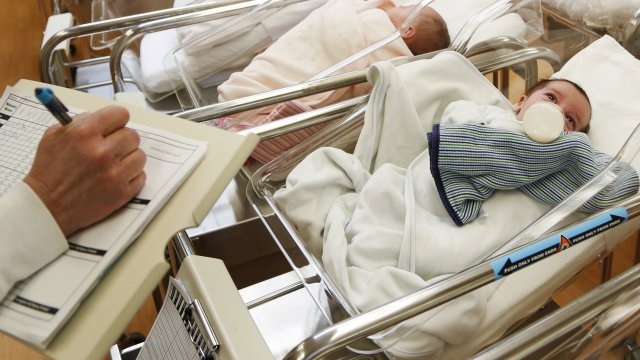 A new survey shows 43% of Millennials and Gen Zers are less likely to have kids because of the pandemic.

The country's biggest age demographic, millennials, are having children at a lower rate than previous generations. There are a few reasons for this. One, the 2008 recession — an estimated 2 million fewer babies were born from 2008-2013 because of it. Second, COVID-19.

As Americans grapple with a pandemic causing a health and economic crisis, another steep decline in the birth rate is underway.

“People have less security knowing when their next paycheck’s coming or that they’ll have a job long-term,” said Emily Mendenhall, a professor at Georgetown who studies global health.

“You want to share that joy with everyone, and you’re not able to,” said Loren Baker.

Loren Baker found out she was pregnant just weeks after President Trump declared a national emergency. Although it’s an exciting time for her, she also says it’s been lonely — sharing the news with her loved ones via FaceTime and going to ultrasound appointments without her husband.

“It’s a really weird feeling not being able to nest the way you normally would,” Baker said.

While some states were recently working on reopening, another spike in cases led to many of those plans to be paused. And millions of Americans remain out of work, leading many economists to predict a slow recovery ahead. But experts say there are still some positives that could come from this.

“People are spending a lot more time together, so they may have more opportunities to try to have a child,” Mendenhall said.

With remote work eliminating long commutes and time spent at the office, some families might be able to take advantage of this time — especially if challenges like lack of paid leave or sky-high child care costs pose less of a problem. But it’s not expected to solve every issue facing family planning.