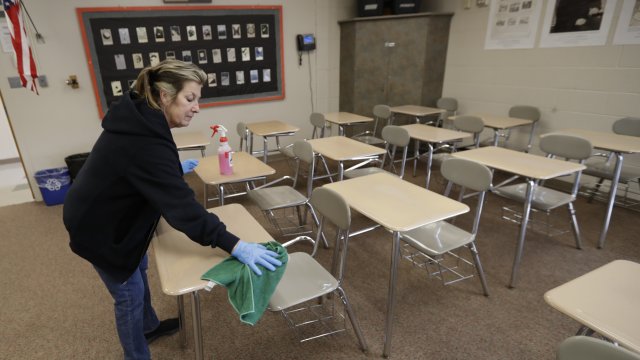 SMS
COVID-19 Could Cost Schools Millions In Wages And Supplies
By Amy Morona
By Amy Morona
June 24, 2020
Returning to the classroom this fall could come with a big price tag for school districts.
SHOW TRANSCRIPT

Returning to the classroom this fall could come with a big price tag for school districts.

One estimate forecasts the average school district could take on nearly $1.8 million in new expenses just to meet the CDC's safety recommendations.

It says districts with about 3,600 students and eight buildings would be looking at $448,000 for additional custodial staff, roughly $44,000 for school workers' masks, and about $39,000 for hand sanitizer in classrooms in the upcoming school year.

“The nature of this pandemic has been that it is hitting every state, [it's] going to impact every school district across the country," said David Lewis, executive director of the Association of School Business Officials International. "And it's going to be a significant amount of money for them to be able to make up.”

One way to close those gaps could be cuts.

“School districts always have a range of tough choices to make when they're looking at reductions," Lewis said. "Unfortunately, a lot of times, that does fall in what some would consider extracurricular activities, is arts, music, drama, programs of that nature."

Districts typically get the bulk of their support at the state level, but those budgets are feeling the strain of the pandemic, too.

In an April letter to Congress, leaders from 76 of the country’s biggest schools requested additional funding on top of what districts may have received in the CARES Relief Act earlier this year.

They said an estimated 20% loss in state and local revenues would quote “likely result in some 275,000 teachers being laid off in big city public school systems alone.”

“We’re pushing on them to step up and give us the support they need," she said. "Our kids are counting on us to get this right.”

Lawmakers from both parties have indicated they’re interested. House Democrats introduced a plan that would offer up $100 billion in grants and $30 billion in bonds for high-poverty schools.