COVID-19 Cases Rise in Parts Of U.S. Ahead Of Winter Worries 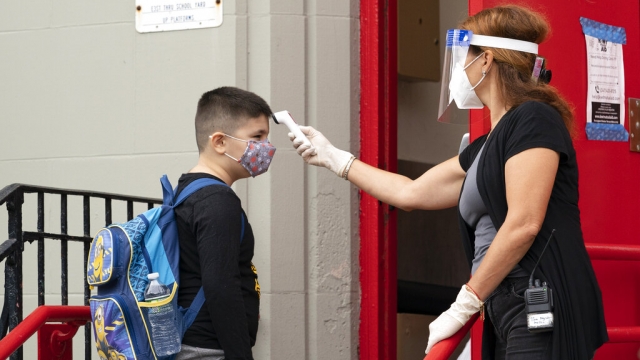 SMS
COVID-19 Cases Rise in Parts Of U.S. Ahead Of Winter Worries
By Amber Strong
By Amber Strong
October 7, 2020
As numbers increase in some areas, health officials are worried about the coming winter months when people are indoors more.
SHOW TRANSCRIPT

Across the country, COVID-19 cases are on the rise in certain areas and that’s not what health officials want to see going into the winter months.

In the Midwest, states like Nebraska are seeing record high hospitalizations.

And in New York.

“Nothing we want to do but the kind of thing we need to do,” said New York City Mayor Bill De Blasio.

Leaders are closing non-essential businesses in certain areas and implementing limitations on capacity in houses of worship after recent spikes in Brooklyn, Queens and the suburbs.

This week, Johns Hopkins University marked more than 210,000 dead from COVID-19. This as the CDC joins scientists around the world in recognizing the virus can be airborne and spread more than six feet indoors, but calling the instances limited.

Dr. Anthony Fauci issued this warning ahead of the winter months.

“When you go into the fall and the winter, the weather is colder. you tend to be indoors. When you’re indoors it becomes more problematic to be able to block the transmission of infection,” said Fauci.

The White House has been a real-life example of how contagious the virus is.

With the president, first lady, aide Hope Hicks, Press Secretary Kaleigh McEneny, and former advisor Kellyanne Conway among the litany of people in and around the administration infected with COVID-19.

And the World Health Organization estimates 10 percent of the world’s population may have been infected with COVID-19  and adding the vast majority of the world “remains at risk.” SIG OUT.