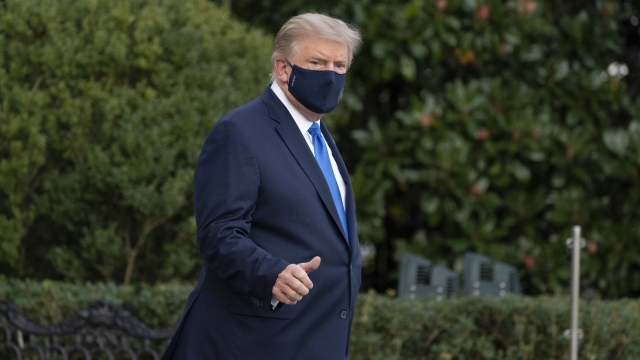 Many questions remain about President Donald Trump's health and his case of COVID-19. To date, his doctors have said he’s gotten supplemental oxygen for two incidents of oxygen level dips.

"The need for oxygen suggests that there's significant inflammation in the lung," Dr. Khalilah Gates, a pulmonary and critical care specialist, said. "And that is kind of our barometer for who gets hospitalized and who gets therapies that are available."

Gates is a pulmonary and critical care specialist at Northwestern Memorial Hospital in Chicago. She says Trump’s risk factors, like his age and weight, and oxygen drops are reason for hospitalization. She also says short-term changes in oxygen shouldn’t impact a patient’s cognitive function — to think, reason, remember and problem solve.

"I suspect no, because I don't think those dips will be sustained," Gates said. "So they're not sustained enough to cause significant impact on the brain."

"Which means alteration of consciousness going from mild disorder or that tension, memory, concentration all the way to a stupor and coma," Koralnik said. "We also had patients who had stroke, seizure, movement, disorder."

Right now, President Trump’s COVID19 treatments include the steroid dexamethasone, an antiviral-remdemsivir, and polyclonal antibodies. The latter two serve as supercharged punches to the virus. Remdemsivir should stop it from replicating. While experimental, the antibodies manufacturer says it has shown initial promising results in studies.

"The patients with the highest viral numbers, the ones who needed the most in a few days, we could drop your viral levels by 99 percent," George Yancopoulos, the  co-founder of Regeneron Pharmaceuticals, said. "And also more quickly, seemingly alleviate symptoms."

When asked if any of the treatments that President Trump is taking have neurological side effects, Gates said, "to my knowledge, I am not aware of any neurologic side effects of those medications. Other than like we talked about the kind of hyperactivity that we can sometimes see with the steroids. So people feel a little bit more anxious, some people report that they are not able to sleep. Some people actually do report mood changes. They become different people, a little bit more agitated."

Gates adds that regardless of who the patient is, it's important to remember each person can react differently to one drug, let alone combinations similar to the president is taking.