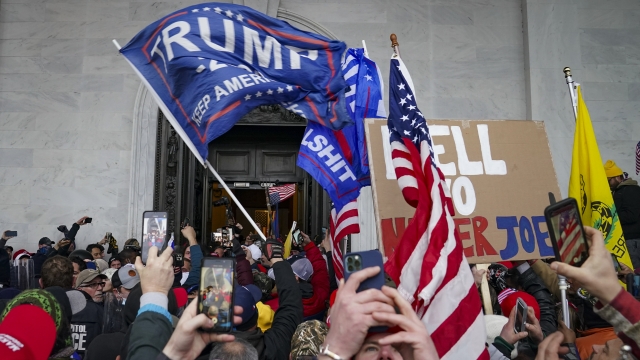 SMS
Federal Court To Hear Arguments Over Former Pres. Trump's Documents
By Alexandra Miller
By Alexandra Miller
November 29, 2021
The House committee investigating Jan. 6 is seeking documents from the former president — something he says should be kept under executive privilege.

The release of former President Donald Trump's records will be up for debate Tuesday when a federal court is set to hear arguments over whether the documents should be released to the House Jan. 6 committee.

The former president is claiming executive privilege shields him from handing over call logs, presidential diaries, emails and other records sought by the House committee investigating the attack on the Capitol.

At the center of the legal battle is the question of how much protection presidents have over White House records once they leave office.

President Biden could have honored Trump's request but instead agreed to turn over the records — prompting the lawsuit.

U.S. District Judge Tanya Chutkan — the original judge to reject Trump's suit — said in her ruling that "presidents are not kings, and plaintiff is not president."

A nearly 70-page brief filed by Trump's legal team ahead of Tuesday's arguments calls the committee's request unprecedented and over broad. It says fulfilling the request would destroy the very fabric of our constitutional separation of powers.

Trump's lawyers also argue he would be "irreparably harmed by the production of his confidential presidential records to Congress."

The committee's rebuttal brief argues executive privilege is not absolute and applies to the executive branch itself — not an individual person.

They say records are critical for understanding the events of Jan. 6, including planning and funding.

The National Archives has also asked the court to support President Biden's decision to release the records. This request is just one court case the committee is facing.

They've now issued dozens of subpoenas to former Trump aides and allies, including high-profile names who have refused to turn over documents and appear before the committee.

The Jan. 6 panel says it has pored over thousands of documents and interviewed hundreds of willing people.

So far, Trump ally Steve Bannon has been indicted on contempt of Congress charges. Bannon's charges haven't pushed others to comply yet but some legal experts believe a decision on Trump's records may.

Other say this is another example of Trump and his allies running out the clock in an effort to stop the investigation.