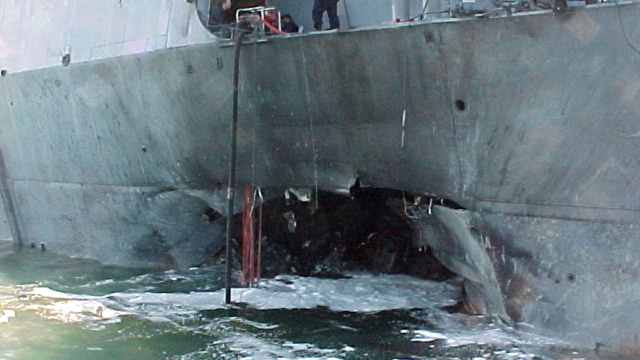 A federal court threw out more than two years of court proceedings in a case against the suspect in the 2000 bombing of the USS Cole.

Here's what happened: On Tuesday, an appeals court panel ruled Col. Vance Spath, a judge overseeing the case, "created a disqualifying appearance of partiality." Spath failed to disclose that he applied for a job as an immigration judge with the Justice Dept., and in short, judges can't oversee cases involving prospective employers. Because the Justice Dept. was involved in the case "from start to finish," the panel ruled all of Spath's decisions from November 2015 to February 2018 should be thrown out.

The ruling is a major stall for a case that has already dragged on for more than seven years. The defendant, Abd al-Rahim al-Nashiri, is accused of orchestrating multiple bombings, including the attack on the USS Cole as it was refueling in Yemen. That bombing killed 17 people and injured 39. Al-Nashiri is being held at Guantanamo Bay and if convicted, he could face the death penalty.

But it could be years before the case goes to trial again. A lawyer for al-Nashiri said, "Eleven years of litigation to get where we are now would suggest Mr. al-Nashiri’s trial defense team may be in high school right now."

The ruling is also another setback for the military commissions set up after 9/11, which human rights groups have heavily criticized. At least six other Guantanamo Bay detainees are awaiting trials that could be years away.