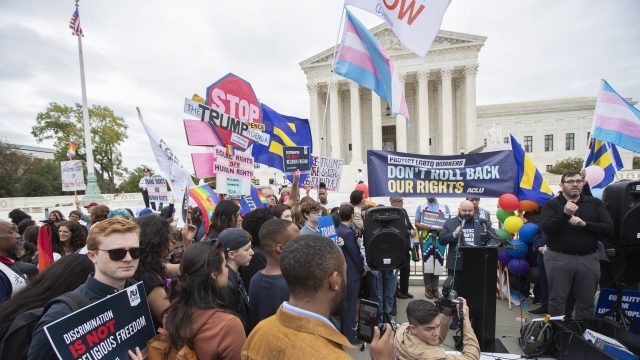 In a 6-3 ruling, the court expanded Title VII of the 1964 Civil Rights Act to ban job discrimination based on sexual orientation or gender identity.

The U.S. Supreme Court ruled Monday that it is illegal for an employer to fire someone because of their sexual orientation or gender identity.

In a 6-3 ruling, the court expanded Title VII of the 1964 Civil Rights Act — which prohibits discrimination on the basis of sex, race, color, national origin or religion — to include sexual orientation and gender identity.

Only 22 states prohibit job discrimination based on sexual orientation or gender identity, and several more provide that protection only to public employees. Monday's ruling means federal law now provides similar protections to millions of gay and transgender workers in the rest of the country.

The ruling is an unexpected one from an increasingly conservative court and one that no longer includes Anthony Kennedy, who authored all four of the court's major gay rights decisions. Kennedy was succeeded by Brett Kavanaugh, who is considered more conservative.

LGBTQ groups praised the ruling as a victory.

"Today is a landmark victory for LGBTQ equality — decades in the making. Today, the United States Supreme Court stood on the right side of history," Alphonso David, president of the Human Rights Campaign, told reporters.

And the decision comes during Pride Month, when the world's LGBTQ communities come together to honor the 1969 Stonewall riots and celebrate the freedom to be themselves.