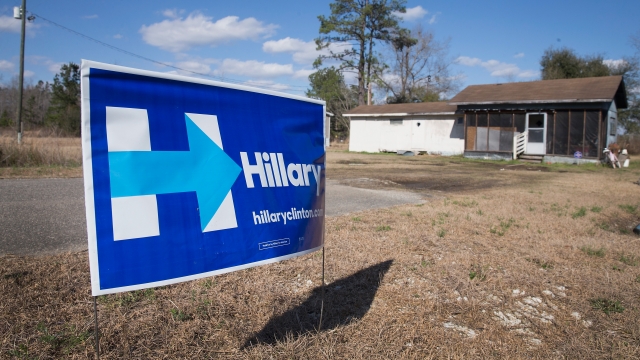 SMS
A Texas Couple Says A Hillary Clinton Yard Sign Got Their Dog Killed
By Grant Suneson
By Grant Suneson
August 25, 2016
Three Clinton signs were stolen from Matt Steadman's yard. Then, his SUV was ruined and his dog was poisoned. He believes the sign thief did it.
SHOW TRANSCRIPT

In 2016, pretty much everyone is used to heated political debates. But one North Texas couple believes they're under attack because of their political preference.

Matt Steadman says he was unfazed when a Hillary Clinton yard sign was stolen off his lawn, then it happened again. The third time, someone left a note under his doormat reading, "Hillary for Prison 2016." That's when things took a dark turn.

The next day his SUV wouldn't start. It was sabotaged beyond repair. "I smelled the inside of my gas tank and there was bleach," Steadman said.

On Sunday, the Steadman's dog, Abby, started convulsing and later died. A veterinarian said she was killed by a neurotoxin.

Steadman says he has no idea who would do this other than the person who keeps stealing his signs. There's no proof that a Donald Trump supporter did this, but many have warned that Trump's violent rhetoric could cause problems.

"So if you see somebody getting ready to throw a tomato, knock the crap out of them, would you? Seriously, just knock the hell — I promise you, I will pay for the legal fees," Trump said.

"Although, the Second Amendment people — maybe there is. I don't know," Trump said.

Criminalizing Clinton and her supporters has been a major theme of Trump's campaign, and he's been broadcasting that message to hundreds of millions of people. Paired with his violent rhetoric, Trump's words have the potential to lead to tragedy.

Former RNC communications director Doug Heye wrote in The Wall Street Journal, "There is a difference between telling the truth and inciting violence — and his are not garden-variety insults but calls to arms."