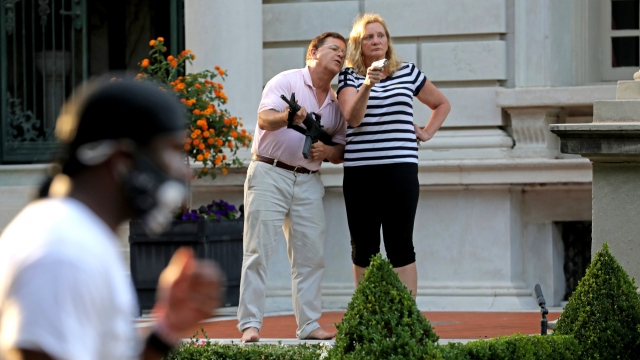 SMS
St. Louis Couple Who Pointed Guns At Protesters Have Been Charged
By Katherine Biek
By Katherine Biek
July 21, 2020
Mark and Patricia McCloskey have each been charged with one count of unlawful use of a weapon.
SHOW TRANSCRIPT

A St. Louis couple is facing felony charges after they were caught on video in June pointing their guns at protesters who were passing by their upscale home.

Mark and Patricia McCloskey have each been charged with one count of unlawful use of a weapon.

Circuit Attorney Kimberly Gardner said, "It is illegal to wave weapons in a threatening manner at those participating in nonviolent protest, and while we are fortunate this situation did not escalate into deadly force, this type of conduct is unacceptable in St. Louis."

Gardner said she's open to recommending a diversion program instead of jail time if the couple is convicted. This type of felony can result in up to four years in prison.

The McCloskeys, who are White, have repeatedly said they pointed their guns at the protesters because they were afraid and trying to protect their property, which is on a private street. They also say the protesters broke down a gate to get into the neighborhood — something eyewitnesses have denied, saying the gate was already open when protesters arrived.

Missouri Attorney General Eric Schmitt is seeking to get the charges against the McCloskeys dismissed under the state's Castle Doctrine, which permits residents to use force to protect their property.

Missouri's governor has also said he'd consider pardoning the couple if they're convicted.