Official Stephon Clark Autopsy Differs From His Family's Private One 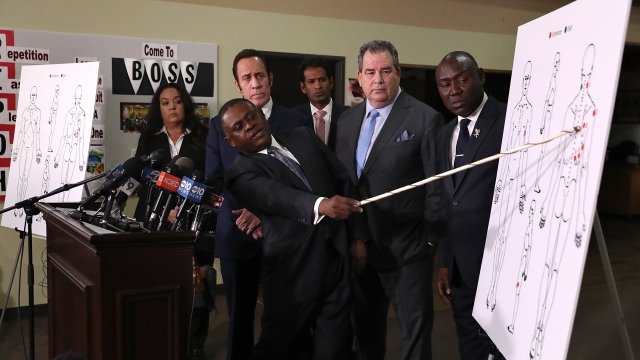 SMS
Official Stephon Clark Autopsy Differs From His Family's Private One
By Katherine Biek
By Katherine Biek
May 2, 2018
The official autopsy says Clark was shot by police seven times, but that number is different from what a private autospy found.
SHOW TRANSCRIPT

Stephon Clark, an unarmed black man who was killed by police back in March, was shot seven times, according to an autopsy released by the Sacramento County coroner.

It says three of the bullets struck Clark in the back, three hit him in the side, and the other hit him on his left thigh.

Those findings are different from a private autopsy conducted by Dr. Bennet Omalu, who was hired by Clark's family. His autopsy said Clark was shot eight times, six of which hit him in the back.

Because the two autopsies differed, the county coroner's office says it had four pathologists review its findings before releasing them to police.

It also had one of those pathologists look at the private autopsy, and he concluded Omalu mistook one exit wound for an entrance wound. The pathologist did not look at Clark's body.

Clark was killed by police while he was in the backyard of his grandmother's home. Police said they thought a cellphone in his hand was a gun.

A toxicology report released by police said Clark had traces of nicotine, cannabis and hydrocodone in his system.

While speaking to The Sacramento Bee, Omalu rejected the county's autopsy results, saying, "A doctor cannot say another doctor is wrong. All you can say is, I don't agree with the opinion of that doctor."