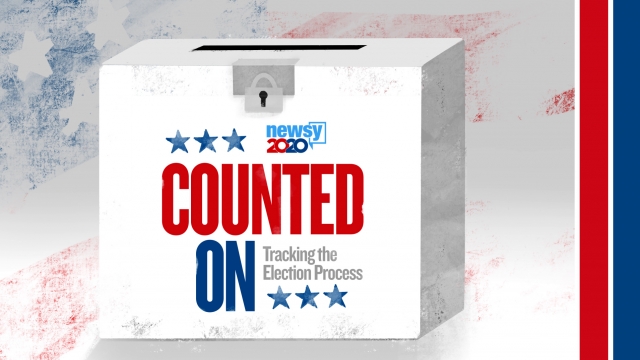 "I always say, where would I want to live if I was not bound by law to live in a county? I would choose James City County," said the Virginia county's Director of Elections Dianna Moorman. "It's very aesthetically pleasing. Everything is in order. I appreciate that."

As the James City County elections office oversees the final week of early voting, they counted their 20,000th in-person voter on October 26. "[It] is huge, considering four years ago. All of our mail and in-person was just right at 7,700," said Moorman. "So we've blown those numbers out of the water."

"Well, there's tons of stress here. But everyone gets along. Everyone is willing to work and cook. The biggest priority first," said Senior Assistant General Registrar Sheila Lohr.

Staff are now turning their attention from the 45 days of early voting toward November 3. "We've been focusing mostly on early voting and the drop boxes and stuff like that," said Season Gallagher, Senior Assistant Registrar. "So it's been a lot. But it's fun, too, because every day we get to see the turnout. You get to see your work paying off more than just one day."

"It's probably the biggest nerve-wracking day of the whole election because we want everything to go smooth," said Lohr. "All the precincts to be opened to on time. We want all the workers to show up. We want the machines to start."

Meanwhile, Moorman is preparing a presentation on Election Day arrestable offenses for the police department. "[They're] forming an elections task force to help be on standby in case anything happens. There are specific laws to help make sure that the voters have a safe, secure place to vote. We have the police task force that will be helping to enforce those should anything happen. So I don't expect there to be anything wrong on Election Day, but we will be ready if there is."

The extended early voting has given her office plenty of time fix any issues with in-person voting ahead of Election Day. "I've always been pretty calm, especially under pressure. But for this election, I'm just seeing the preview of Election Day for the forty five days. It's calmed me," said Moorman after stopping by the early vote center. "And to see it be put into action after all of this blood, sweat and literal tears along the way. That's rewarding."

But all the work it has taken to pull of this year's general election is also taking it's toll on Moorman and her colleagues around the state. "My life just does not exist during election season. That's just the nature of it. With all of these new guidelines, it's getting worse and worse. The stress gets to be unbearable," she said.

"What happens when we have so many registrars that all say 'I'm done,' all at once? And it's getting to that point. I wouldn't be surprised after this election that that would be the highest turnover rate that we've had in a long time. You can't just step into the job and say, 'Hey, I can do this.' You plan from election to election. If you know what the last election did, then that helps you plan for the next one. And when you lose all of that institutional knowledge, you're kind of starting from scratch.

"I want people to trust us and realize that we are doing the best that we can and that we have families and that we have ethics and we are putting in tireless hours just to ensure that the vote is done properly," she said.