Could You Live In A Space The Size Of A One-Car Garage? 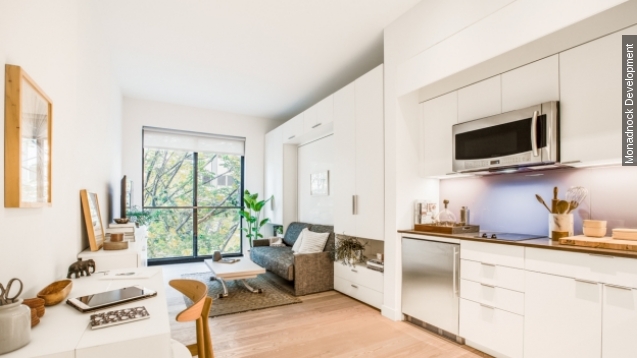 SMS
Could You Live In A Space The Size Of A One-Car Garage?
By Cody LaGrow
By Cody LaGrow
December 28, 2015
More than 60,000 people are vying for a limited number of micro-apartments in New York City.
SHOW TRANSCRIPT

Would you live in a one-car garage? Because tens of thousands of people in New York are begging to do so ... sort of.

These micro-apartments in Manhattan have produced mega-interest. More than 60,000 people applied to live in 14 below-market-rate apartments ranging from 265 to 360 square feet at the bargain price of around $1,000 a month.

The building itself will house a total of 55 pint-sized pads — a majority of which will rent for upwards of $3,150 a month. Stop complaining — cable and Internet are included.

It's a new era for New York real estate. The city waived a 400-square-foot-minimum requirement for the project, a change some leaders say doesn't fix New York's lack of affordable housing.

San Francisco and Boston have approved similar waivers in recent years that allow the construction of these very humble homes.