Could US Post Offices Become Banks? Here's How The Plan Would Work 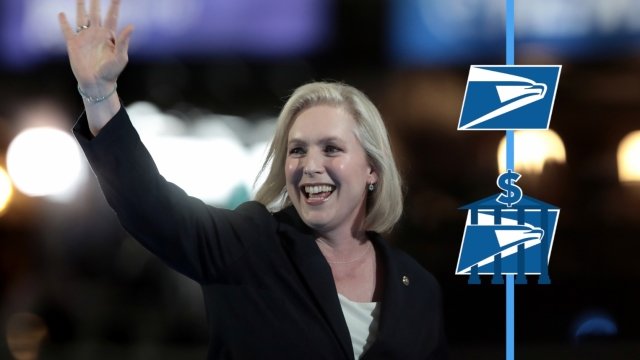 SMS
Could US Post Offices Become Banks? Here's How The Plan Would Work
By Zach Toombs
By Zach Toombs
May 14, 2018
The proposal from Democratic Sen. Kirsten Gillibrand is meant to extend financial services to the poor but could also present new challenges.
SHOW TRANSCRIPT

What happens when you turn U.S. post offices into banks? There's a new proposal in Congress to do just that. And if it gets bipartisan support (and actually works), it's meant to provide banking to millions of low-income Americans.

The latest stats show 7 percent of U.S. households don't even have a bank account. Another 20 percent turn to expensive and often predatory options like payday lenders, which give short-term loans with huge interest payments.

Sen. Kirsten Gillibrand of New York put together a postal banking plan to change that. And other senators in support of that plan have had their sights set on payday lenders for years.

Now, there are a couple different ways Congress could build banking into the U.S. Postal Service. The first approach would just cover the basics.

That means offering low-dollar checking accounts and debit cards to low-income earners. That would at least offer basic financial services to all Americans, regardless of wealth. And it probably wouldn't be too tough politically because the big banks typically aren't interested in these customers.

But Gillibrand's proposal would go further, allowing the postal service to also make loans of up to $1,000 with a super low interest rate around 2 percent, even to the poorest Americans. Because many of those loans would be at risk of not being paid back, some experts say the interest rate will have to be higher, maybe 25 percent. But that would still be a lot lower than rates from payday lenders, which often have people pay back three or four times what they borrowed.

That means the U.S. Postal Service could drive many payday loan companies out of business, which is bound to fire up that industry's lobbyists as well as small-government Republicans in Congress, who wouldn't be too thrilled with a government-run institution competing with private businesses.

There's also concern that a poorly run postal banking service could turn into a burden for taxpayers or even require a bailout. But experts estimate the plan could actually be a financial boom for the postal service, adding billions of dollars in revenue each year.

And as wild as the idea sounds, it's actually not new. More than 80 nations around the world, including the U.K., Japan and China, have post office banking. The U.S. itself had postal banking for much of the early 20th century until the Johnson administration didn't think it was necessary. But if Gillibrand and other progressive senators get their way, it could be making a comeback.