Could 'The Interview' Change The Way Movies Are Released? 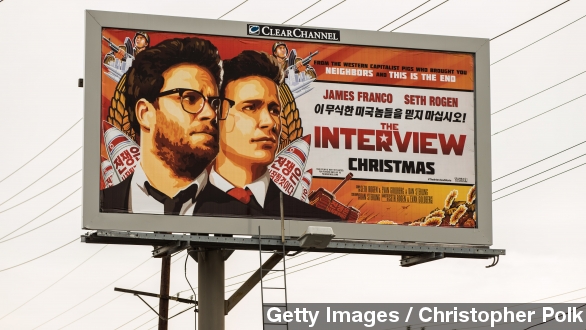 SMS
Could 'The Interview' Change The Way Movies Are Released?
By Madison Burke
By Madison Burke
December 24, 2014
If Sony is successful with its simultaneous digital and theatrical release of "The Interview," other studios could adopt the approach as well.
SHOW TRANSCRIPT

The release of "The Interview" has certainly been far from normal, but could it be blazing some new industry trends?

The movie's Christmas release was originally canceled by its creator, Sony, after major theater chains pulled the film following threats from hackers.

But, Sony ended up simultaneously releasing the film to streaming services and theaters that would show it — something generally seen as contentious in the industry.

Most movie studios show their films exclusively to theaters first as a way to drive business to the theaters, but because most major theater chains refused to show the film, Sony had to get creative.

We have seen some studios do same day theater and digital releases, but never before with a high profile movie like "The Interview."

Analysts are saying if Sony is successful in its simultaneous release, we could see additional studios copy the approach.

"Maybe this is how movies are gonna come out in the future. Both in theaters and at home," said Brian Stelter.

Sony is offering the movie for rent and purchase on YouTube, Google Play, and XBox Video as well as its own site.

But after the recent cyberattack of Sony it is questionable how safe people will feel using their credit card to rent or purchase the movie from the company's site.

Beginning Thursday the movie will be shown in hundreds of select theaters across the country.