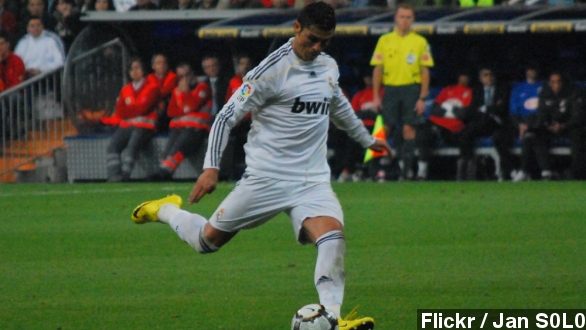 By Matt Moreno
June 18, 2014
Spanish newspaper El Confidencial reports Ronaldo's doctor has advised him not to play lest he risk putting his entire career in jeopardy.
SHOW TRANSCRIPT

Portugal's superstar and current FIFA player of the year, Cristiano Ronaldo, might need to sit out the rest of the World Cup or risk being out for his career.

It's yet to be confirmed by the team, but multiple outlets are reporting Ronaldo's play in this World Cup is over after a nagging knee injury proved too much to handle. (Via Metro, The Wall Street Journal, NBC)

Spanish newspaper El Confidencial first reported the story and quotes a Dr. Noronha, translated to English as saying, ​"Let your knee rest, or your future is in danger​" to which Ronaldo reportedly replied, "I'm the one that says whether I'm playing or not."

While Ronaldo's status remains in question for Sunday's game, here's what we do know.

Portugal's front man limped out of practice early Wednesday after his left knee started bothering him. He was then seen with an ice pack on the knee while on the sideline. (Via Daily Mail)

Portugal is already facing an uphill battle to make it out of group play after a a 4-0 drudging by Germany knocked them to last in Group G standings.

They're facing the U.S. next. The American team is coming off an emotional 2-1 win against Ghana — the same team that knocked the U.S. out of the last two tournaments.

But the U.S. might also be down a star player or two as Jozy Altidore's status is up in the air after a leg injury and Clint Dempsey is nursing a broken nose. Dempsey returned to Monday's game after his injury. (Via Yahoo, New York Daily News)

The U.S. will play Portugal, with or without Ronaldo, Sunday at 5 p.m.