Picture A Revitalized Asia-Pacific Region ... Thanks To North Korea 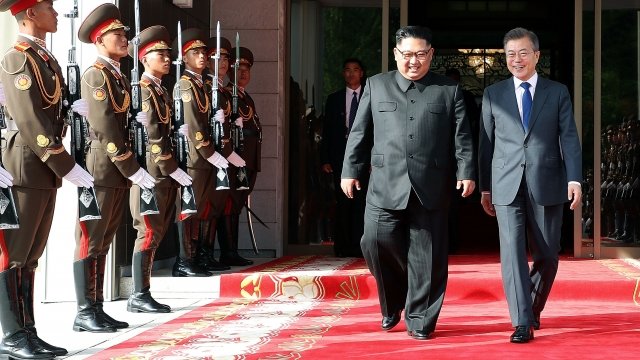 SMS
Picture A Revitalized Asia-Pacific Region ... Thanks To North Korea
By Chance Seales
By Chance Seales
June 9, 2018
North Korea's integration into the global economy could have a profound impact on regional development and growth.
SHOW TRANSCRIPT

The Yeouido district here in Seoul is the heart of South Korea's economy. The nation has grown past serious financial struggles to a robust, fully-developed economy in just a few decades. It's politically and economically open. We wanted to find out, could that same model work in North Korea? As these nations begin to cooperate again, is there a joint economic path to be found?

"In the near future, the two Koreas are not going to be unified as one country — the border would still be there, but the railroads, roads and electricity connections — that could be a win-win strategy for both," said Han Beom Cho, senior research fellow from the Korea Institute of National Unification.

Cho is looking for that big win. He's with the Korea Institute of National Unification hoping to transform a physically connected peninsula into one also unified financially and culturally.

Where to begin is a messy question. There's no uniform answer when you talk to experts because past attempts have disintegrated in a snap — like the factories in the Kaesong industrial complex, where North and South Koreans once worked side by side. South Korean businesses were investing, hiring North Korean workers at less than $200 per month, a huge money saver.

Minimum wage for South Korean workers is nearly $1,500 per month. It was going well until the South suddenly pulled out in 2016 as North Korean leader Kim Jong-un ramped up his nuclear program.

Again, back to winning: South Korea is looking to win access and a direct land route through North Korea to the rest of Asia and Europe.

Kim, first and foremost, is hoping to develop the North Korean economy and stay in power. This might require both nations take a step of faith again, knowing the diplomatic ice below could crack at any minute.

"If Kim Jong-un breaks a promise again, where everyone thinks, 'Now it's different,' then he crosses the river and he can't come back. After this is on track, there's very low chance that Kim Jong-Un would ruin those relationships. If he does, then all those basic economic plans that North Korea has would all break apart. But ... North Korea has come too far in a dangerous situation to do what it's done in the past. So it's very far-fetched to compare the past to what's happening now," said Cho.

Here's where expert opinions diverge: Does Kim Jong-un need outside investors? Cho says yes — that the North Korean economy is in danger of collapsing.

But Newsy asked Balbina Hwang, a visiting professor at Georgetown University, if Kim can perhaps go it alone and survive economically.

"Absolutely. And in fact, there are some signs that the North Korean economy is actually beginning to revive. And I think the danger is that that is exactly what Kim Jong-un is going to be able to achieve — that he is actually beginning to turn around that economy, which everybody said had failed, was failed and was absolutely going to collapse. But people, experts, have been predicting the collapse of the North Korean economy for the last 20 years, and yet it has continued," Hwang said.

That brings us to the question of "openness." North and South Korea couldn't be more different. Ninety percent of South Koreans have the internet, there's public Wi-Fi on subways. In the North, internet is illegal — only the highly-controlled intranet is allowed. Now imagine the prospect of businesses opening with outside investors flowing in, welcoming external corporate and political influences so Kim now finds himself looking at a variety of economic models and deciding what serves his interests.

"Everybody says, including China, 'Why don't you follow our model?' And I think North Korea, for the last five years, has essentially said to China, 'No, we are not interested in your model, because your model has actually given Chinese citizens way too much freedom,' and that is exactly what North Korea does not want," said Hwang.

"There won't be full-scale free movement of labor, but in a limited sense, it's possible. South Korean business in North Korea, that'll be the first stage. In five years, there might be some North Korean businesses in Seoul, authorized by Kim Jong-un's government. A very limited number of people who are selected," said Cho.

Businesses here in South Korea and around the world might consider investing in North Korea. But there's one main hurdle: sanctions. Until international sanctions are rolled back, corporations and governments would be penalized if they set up shop in the North or even invest in its projects. So when you hear the word "normalization" during negotiations, think of that as a shingle hanging on Pyongyang’s front door saying, "open for business."