Could Eating Chicken On The Bone Make Kids More Aggressive? 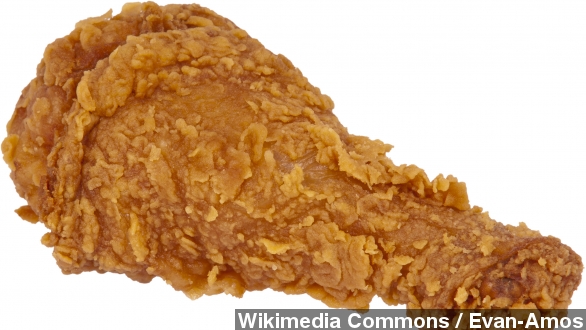 By Briana Koeneman
April 30, 2014
According to a new study, children become more socially aggressive and disobedient when they have to hold onto their food to eat it.
SHOW TRANSCRIPT

Getting children to behave better could be as easy as swapping that chicken leg for smaller pieces of food they can eat with a fork.

"A study in the journal of Eating Behaviors finds kids are more socially aggressive and disobedient when they have to hold onto their food." (Via KPTV)

The study's authors say they found that kids between the ages of 6 and 10 were more aggressive and rowdier when they were given foods they had to eat with their front teeth, like drumsticks, corn on the cob or apples. (Via Wikimedia Commons / Evan-Amos, Flickr / darwin Bell / Abhijit Tembhekar)

On the first day, half the children were given chicken on the bone to eat for lunch while the other six children ate boneless chicken cut into bite-sized pieces. Then, on the second day, they switched the children over. (Via Eating Behaviors)

Science Daily reports the researchers filmed the children eating on both days and then had experts evaluate their behavior for aggressiveness, compliance and whether they exhibited any particularly rowdy behaviors.

The study's lead author, Brian Wansink, says he and his team found that the children who ate the chicken on the bone were twice as likely to disobey adults and twice as aggressive toward other kids. (Via Flickr / micsten)

"So think twice if you have an option of giving your kids forks and knives to eat with or hands. That's one road, one step, toward better-behaved kids." (Via YouTube / Brian Wansink)

But before you snatch that chicken wing from your child's hand, it's important to note kids need time during the day to let off some steam.

The American Academy of Pediatrics has emphasized the importance of school recesses because they give children physical, emotional, social and cognitive benefits.

And a clinical psychologist told Fox News he's not buying the researchers' conclusion.

"I put absolutely zero chicken stock in this study. I think people have been eating chicken wings, chicken drumsticks for a millennia, and I don't think it's made them any more aggressive than they otherwise would have been." (Via Fox News)

The study was published April 1 in the journal Eating Behaviors.