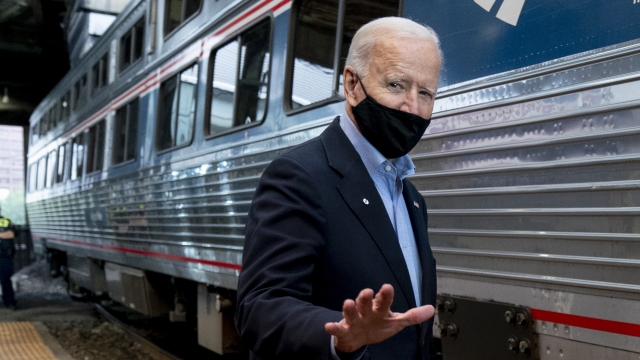 As President Biden pushes his $2 trillion dollar infrastructure plan, transportation advocates are hopeful the nation's rail system could finally get its long-awaited moment in the sun.

"We've got a president who loves trains, a secretary of transportation that's talking about the need to become the world leader," Ezra Silk, political director of the U.S. High Speed Rail Association, says of President Joe Biden and Transportation Secretary Pete Buttigieg.

President Biden, nicknamed "Amtrak Joe," took the train daily from his home in Delaware to D.C. during his 36 years in the Senate. He even launched his first presidential campaign in 1987 at his hometown train station, and rode the rails hours after announcing his White House bid in 2019.

The "Amtrak Evangelist" now sits in the Oval Office — and his infrastructure plan sets aside $80 billion for modernizing and expanding the nation's rail network over eight years.

"You and your family could travel coast to coast without a single tank of gas on-board a high-speed train," the president said last month while introducing his infrastructure plan, dubbed "The American Jobs Act."

The idea is actually about more than family trips. Its goal is to modernize and scale up Amtrak service to reduce traffic and air pollution, and expand access to jobs, while creating thousands of new ones. Transportation is the largest source of the country's greenhouse gas emissions.

Amtrak responded to the president's proposal by unveiling its dream map for what an expanded U.S. rail network would look like by 2035. The project would provide service to up to 160 communities, with 30 possible new routes. It includes new lines in major cities, like Las Vegas, Phoenix, Nashville and Columbus; a revamped Texas network; and expanded service across the Midwest and Southeast

Advocates and experts believe the nation's rail network has been underfunded, under-invested and ignored for too long, even though Americans largely embrace train travel when it's viable.

"The Northeast Corridor, for example, those trains are packed everyday," says Andy Kunz, president and CEO of the U.S. High Speed Rail Association. "And it's not that great of a service, and yet they're still packed because it's still better than everything else."

Amtrak set records for ridership and revenue in 2019, and was on track to turn a profit in 2020 for the first time ever, but it took a massive hit amid the pandemic.

The nation's rail network has historically received limited funding, and advocates say building a high-speed rail system would require far more than $80 billion, particularly because the U.S. has a lot of catching up to do.

"80 billion is not even close if we're going to meet Secretary Buttigieg's goal of becoming a world leader in high-speed rail," explains Silk. "Just to catch up to where China is now, we're going to need to invest a trillion over the next 10 years."

Amtrak's "Acela Express" is the only high-speed service in the U.S., hitting up to 150 miles an hour in some spots between D.C. and Boston, and similar projects are underway in several states. But compared to other industrialized nations, the U.S. is seriously behind.

To keep up, an infrastructure package will need to advance through Congress. Many Republicans have already united in opposition against it, taking issue with its price tag and scope, as well as calls to fund it by raising the corporate tax rate.

In the past decade, Republicans have been reluctant to spend on rail projects. They've slashed Amtrak's funding, redirected cash, and suggested privatizing the rail system altogether. Many Republicans have argued trains are an outdated mode of transportation that's slow, expensive, require constant maintenance and "threatens American 'individualism.'" The GOP's broader opposition toward rail has even been described as a "war."

Rail advocates meanwhile believe a high-speed network will pay for itself because it’ll create thousands of jobs, fight climate change and bridge the gap between rural populations and urban hubs.

"The time has come for a rail revolution," says Silk.