Could A Wall-For-DACA Deal Solve The Shutdown Impasse? 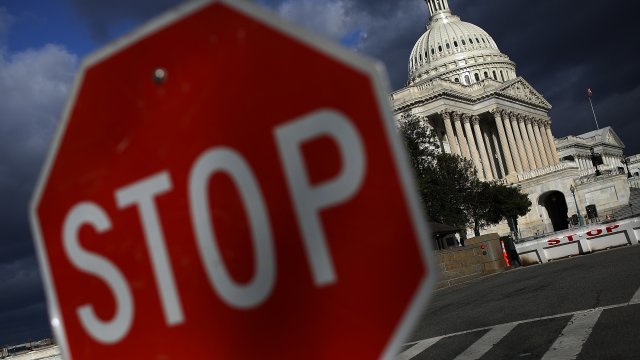 SMS
Could A Wall-For-DACA Deal Solve The Shutdown Impasse?
By Ben Schamisso
By Ben Schamisso
January 3, 2019
As the government shutdown drags on, some lawmakers and activists are cautiously discussing a deal: border wall funding for DACA protections.
SHOW TRANSCRIPT

"How long do you think the government will stay partially shutdown?" a reporter asked.

"Could be a long time and it could be [reopened] quickly." President Donald Trump responded.

The president and Democratic leaders have shown little progress in their negotiations to reopen the government, and now some lawmakers and activists are cautiously talking about a wall-for-DACA deal that could end the impasse.

Lindsay Graham: "I think it's possible, if we start talking to each other, to have a deal that would provider relief to the DACA population."

On the Democrats' side, outgoing Rep. Luis Gutierrez advised newcomers to make necessary sacrifices in order to pass immigration reform.

Democratic Reps. Jackie Speier and Debbie Dingell both recently said they would trade a DACA deal for some wall funding.

As for the president, he said on Wednesday that he would consider a wall-for-DACA deal if the Supreme Court rules in favor of his administration's efforts to end the program.

Trump: "If we win that case — and I say this for all to hear — we’ll easily be able to make a deal on DACA and the wall as a combination. But until we win that case, they don't really want to talk about DACA."

Trump said last year that he wanted a "bill of love" for DACA recipients. But he later walked away from a bill that would have provided $25 billion for border security in exchange for protections for so-called Dreamers because it didn't include cuts in legal immigration. As a result, immigrant advocates are weary of compromising with Trump on the fates of DACA recipients.

Still, some say it's in the Dreamers' best interest not to block shutdown negotiations with the Trump administration.