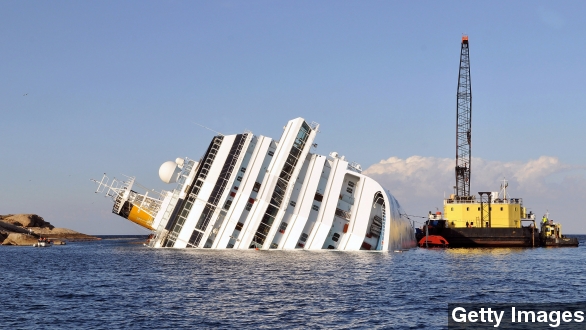 SMS
Costa Concordia Finally Arrives At Port Of Genoa
By Collin Ruane
By Collin Ruane
July 27, 2014
The 114,000-ton cruise ship made a more than 150-mile-long journey from Giglio to the Port of Genoa at a speed of about 2 miles per hour.
SHOW TRANSCRIPT

More than two and a half years after capsizing off the coast of a small Italian island, the now-upright Costa Concordia cruise ship has made its way to the Port of Genoa. (Via Getty Images)

The more than 150 mile-long journey came almost a year after crews got the ship upright. They waited until now to move the ship simply because the Mediterranean waters are most calm this time of the year.

NBC shot this footage earlier this month as officials worked to get the ship fully floating so crews could move it at the slow speed of just 2.3 miles per hour.

But after having water inside of it for more than two years, how were crews able to raise the vessel and get it floating again?

According to the BBC, officials did it by placing so-called buoyancy chambers around the ship. Air inside those chambers helped keep the massive ship afloat.

It then took four days for the 114,000-ton ship to get towed from Giglio to the Port of Genoa. But, CNN reports the ship's arrival is not the end of the ship's story.

The ship's captain remains on trial for charges of manslaughter, abandoning ship and causing a maritime disaster which killed more than 30 people. The Telegraph says he was recently seen at an Italian vacation spot celebrating a reported book deal.

The Costa Concordia's owner says the entire operation could cost as much as $2 billion — more than three times what it cost to build the ship. The next step is dismantling it, which could take as long as two years.