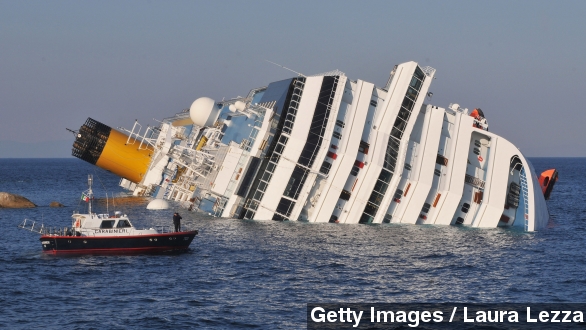 SMS
Costa Concordia Captain Found Guilty Of Manslaughter
By Katherine Biek
By Katherine Biek
February 11, 2015
Francesco Schettino was sentenced to 16 years in prison for his role in the 2012 shipwreck that left 32 people dead.
SHOW TRANSCRIPT

Francesco Schettino, the captain of the wrecked Costa Concordia cruise ship, was sentenced to 16 years in prison Wednesday after being convicted on multiple counts of manslaughter.

In January 2012, Schettino steered the ship too close to the island of Giglio off the Tuscan coast and ran it into some rocks. Thirty-two people died when the ship capsized. (Video via RT)

He was charged with causing the shipwreck, manslaughter and evacuating the ship ahead of its more than 4,000 passengers and crew members.

Schettino made multiple attempts to secure a plea deal but was denied by the prosecution each time.

The prosecution called for Schettino to be sentenced to 26 years in prison, calling the incident, "a Titanic affair that merits adequate punishment."

Schettino disagreed, telling the judges in his final appeal Wednesday: "It is difficult to call what I have been living through a 'life.' All the responsibility has been loaded on to me with no respect for the truth or for the memory of the victims."

The cruise line's land-based crisis coordinator and four crew members previously accepted plea deals for their parts in the incident.