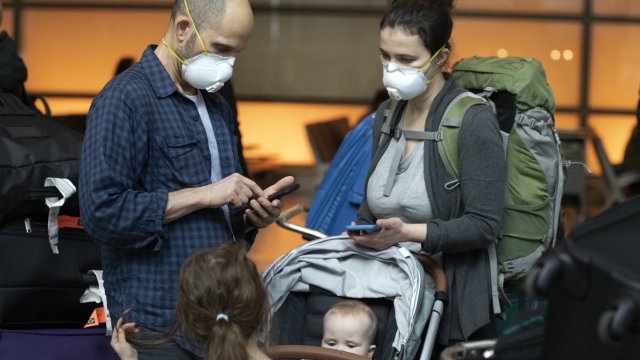 SMS
Americans In Europe Are Worried And Confused By The U.S. Travel Ban
By Ben Schamisso
By Ben Schamisso
March 13, 2020
The travel suspensions affecting most of Europe have left Americans abroad struggling to understand how and when they can come home.
SHOW TRANSCRIPT

Americans abroad are racing to understand what the new ban on most travel from Europe means for them. Many have no idea how and when they'll be able come home — or at what cost.

"We were really kind of overwhelmed with, 'What does that mean for us as American citizens?'" said Jennifer Briner, an American tutor who works at an international high school in Switzerland.

They woke up on Thursday to alarming messages from friends and family in the U.S. who watched President Trump announce live that in an effort to slow the spread of coronavirus:

"We will be suspending all travel from Europe to the United States for the next 30 days."

Briner said: "Immediately, as a mom, for me, it was an overwhelming sense that, 'Wow, when will I really get to see my family?' I have four kids back home, and when will I see them?"

Later, the White House clarified that the travel suspensions from 26 countries in Europe's open travel zone does not apply to U.S. citizens or permanent residents, or their immediate relatives.

But then came more unanswered questions and more uncertainty.

"Right now, we're just learning which airport you can actually fly in to. But the problem is we don't know if we arrive in another state, will we be quarantined in that state at that airport, or are we allowed to travel from there on?" said Allie Brown, a chemical engineering student who is wrapping her study abroad program in Germany.

Vice President Mike Pence said Thursday on Fox News that only 13 airports will accept Americans returning home from Europe. He said that upon arrival, the travelers will receive extra screenings and be asked to self-quarantine for 14 days.

"You're like, wait a minute, I didn't know this was going to happen," said Briner's husband, Eric, who has a two-year contract to teach at the Swiss international high school."

He added: "What does it mean to be quarantined? And are you taken to a place in Chicago for 14 days? Or are you able to go all the way to Columbia, [Missouri,] and they just tell you to stay in your home? Are they just trusting you to do that?"

Adding to the confusion, many airlines said they would soon cut transatlantic flights because of the ban — prompting worried U.S. citizens to rush and book the earliest flights home. That led to absurd price surges.

"Any one-way flights from places are at least $2,500. So that's kind of where the panic is: It's not necessarily the mass hysteria of coronavirus, necessarily. It's just how do we get back so we don't get trapped in Germany for two weeks?" Brown said.

Some Americans have been able to reroute their existing flights home to ensure they're landing at one of 13 approved airports. Others have decided staying in Europe is the safest and cheapest option for now.

"If we're a risk that they would deem, even though we don't have the virus or anything, would we get lumped in and stuck somewhere for two weeks where we have no family or friends? That concerns me a lot. Where would our entry point be? And how long would we have to stay?" Jennifer Briner said.

"So maybe the best thing is that we do stay here," added Eric Briner.