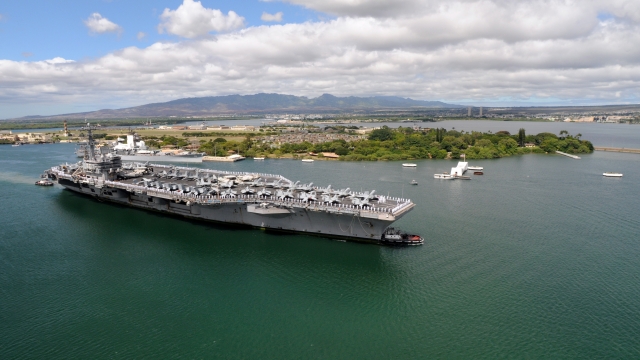 One thousand, seven hundred cases of the coronavirus have been confirmed in the Navy. That's the latest number after yet another ship is hit by COVID-19, this time the USS Ronald Reagan.

It's docked in Yokosuka, Japan, and has been since the DOD ordered a two-week stop movement to create a virus-free environment.

Navy spokesperson Rachel McMarr says “sailors who tested positive had been sequestered at surrounded bases including naval air station Atsugi and Yokota air base away from others.”

She says these measures were taken two weeks ago, but according to a Task Force 70 spokesperson, “The sailors that  showed no symptoms were tested over the weekend as their mandated isolation came to an end.”

And that’s when they discovered they were carrying the virus.

"This [restriction of movement] period allowed fleet leadership the ability to monitor the health of the force daily, in a controlled and secure environment, while conducting tests for COVID-19, before returning sailors to their units. This is a proactive preventative measure designed to minimize the potential risk of exposure to our sailors and their families; prevent the spread of coronavirus to u.s. forces, allies, partners and the community; and maximize health protection of 7th Fleet," Lt. Cmdr. Sean Brophy, public affairs officer for Carrier Strike Group 5, said in a statement.

The USS Theodore Roosevelt and USS Nimitz also had multiple confirmed cases of the virus on board.

Any sailors who test positive for COVID-19 will remain in isolation until their test results come back negative.