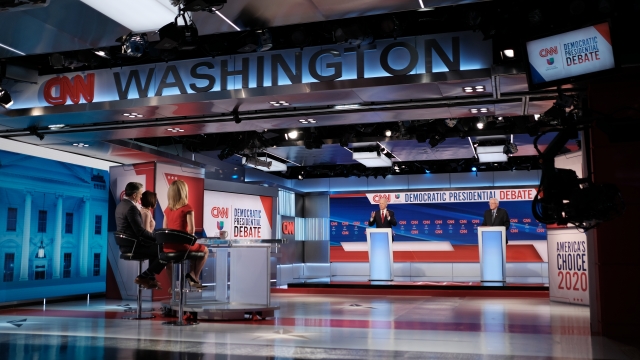 It was the first one-on-one debate of the Democratic primary season. It was also the first debate since the coronavirus became a pandemic.

"In terms of Medicare for all, despite what the vice president is saying, what the experts tell us is that one of the reasons that we are unprepared and have been unprepared is we don't have a system. We've got thousands of private insurance plans. That is not a system that is prepared to provide health care to all people," Sanders said.

"The national crisis says, we're responding. It's all free. You don't have to pay for a thing. That has nothing to do with whether or not you have an insurance policy. This is a crisis. We're at was with the virus. We're at war with the virus. It has nothing to do with co-pays or anything. We just pass a law saying that you do not have to pay for any of this, period," Biden said.

Because of the coronavirus pandemic, the debate was moved from Arizona to the CNN studios here in Washington D.C.

The two candidates also addressed the growing economic concerns the virus is causing.

"They are closing down bars. They're closing down restaurants. What happens to the workers who are there? What happens to the millions of workers who may end up losing their jobs? ... What we have got to say to every worker in America is, you know what? Don't panic. You're not gonna, you'll be able to pay your mortgage because you're gonna get a check," Sanders said.

The biggest non-coronavirus news to come out of the debate was an announcement from Biden on who he's considering for vice president.

"And I commit that I will, in fact, appoint a, I'll pick a woman to be vice president," Biden said.

"Just to be clear, you just committed here tonight that your running mate, if you get the nomination, will be a woman?" CNN anchor Dana Bash asked.

"The vice president committed to picking a woman as his running mate.  If you get the nomination, will you?" Bash asked.

"In all likelihood, I will," Sanders said.

The debate came two days before another four states head to the polls. Arizona, Florida, Ohio and Illinois vote on Tuesday, putting their 577 delegates up for grabs.

Sunday night's debate might be the last one for the Democratic presidential hopefuls since the DNC has yet to schedule a debate for April.