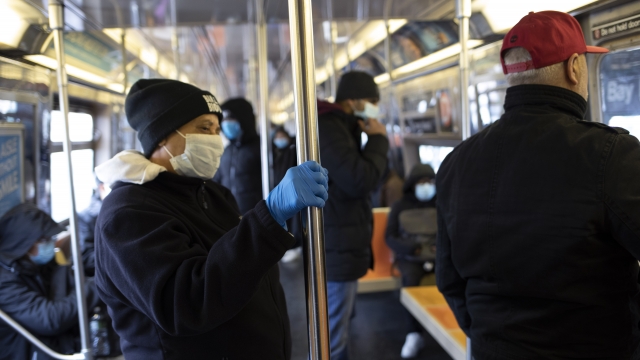 SMS
Coronavirus Fatalities Climb Above 1,000 In U.S.
By Meg Hilling
By Meg Hilling
March 26, 2020
A quarter of those deaths are recorded as having occurred in the state of New York.
SHOW TRANSCRIPT

The number of deaths linked to the coronavirus continues to climb globally, as the U.S. has surpassed 1,000 fatalities.

According to Johns Hopkins University, over a quarter of the reported deaths in the U.S. have occurred in New York.

"But it is true we are the epicenter of this crisis. And that's why we so desperately need help, particularly from our federal government," New York City Mayor Bill de Blasio said.

State and local governments are placing mounting pressure on the federal government to provide additional ventilators and other much needed medical equipment to combat the virus. On Wednesday, the Senate unanimously passed a $2 trillion stimulus bill to help Americans impacted by the coronavirus pandemic.

Of the 69,000 people with confirmed cases of coronavirus in the United States, about 620 have recovered. According to the World Health Organization, it may take two to six weeks to rebound from the illness.

Corrections: A previous version of this story incorrectly said 280 deaths occurred in the state of New York. As of the time this was originally published, 280 people in New York City had died from the coronavirus. This story has been updated.