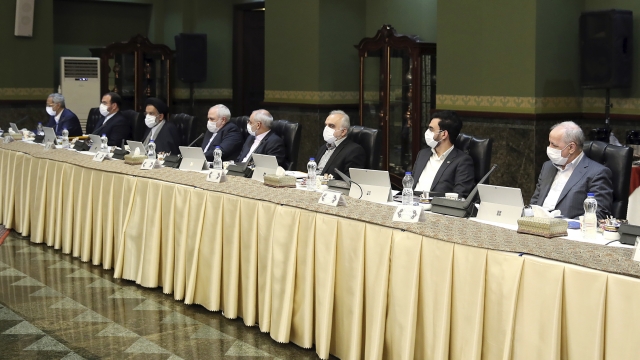 Iran is fast becoming one of the world's most searing crisis points for the coronavirus. Nearly 150 deaths were reported in the country on Wednesday alone, bringing the total to more than 1,100.

The New York Times reports Iranian citizens are losing confidence in their government's ability to battle the crisis, with infections now topping 17,000 cases and increasing by more than 1,000 a day.

Iran's difficulties with the virus have been marked by power struggles in the government over how to respond.

Henry Rome, an Iran specialist for the Eurasia group, told the Times top officials "do not want to cause panic, or shut down what's left of the economy, or implicitly admit they made a mistake." The government is also blaming U.S. sanctions for weakening Iran's health system and its ability to address the spread.

The Iran crisis has come to be symbolized by this video in late February. As a government spokesman downplayed the coronavirus danger, a deputy health minister next to him was sweating profusely from fever. He was diagnosed with the virus a day later.

Voice of America reports the pandemic is fanning fears among Iran's Afghan refugee community of 3 million people. Thousands are fleeing daily for the Afghanistan border, fearing they won't get medical help in Iran.

President Hassan Rouhani insisted Wednesday Iran's government has been "straight forward" and "honest" with its citizens about the virus.

However, Rouhani has resisted locking down cities and closing businesses to slow the contagion. But the Times reports some local authorities are openly defying him, acting on their own to do just that.