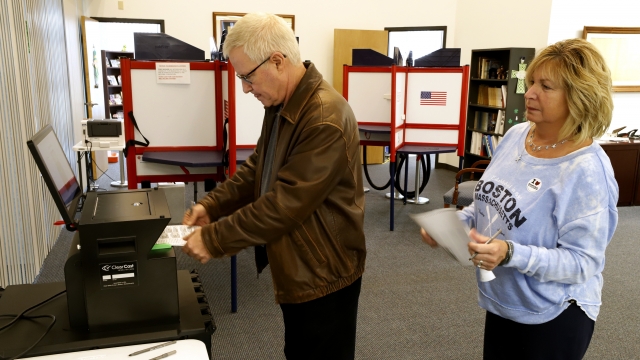 SMS
Coronavirus Risks Could Keep Older Voters At Home On Election Day
By Shira Tarlo
By Shira Tarlo
March 17, 2020
Seniors play a crucial role in U.S. elections, but the coronavirus crisis could impact how many head to the polls.
SHOW TRANSCRIPT

Election officials are taking extra precautions to ensure voters feel safe casting ballots as the number of coronavirus cases continues to rise nationwide. But there are also concerns those precautionary measures could make it more difficult for some Americans to vote.

Florida, a state famous for its large population of retirees, has moved polling locations from senior living communities, and election officials are urging older Americans to vote by mail ahead of the state's March 17 primary. Ohio leaders moved polling sites from senior care facilities before ultimately recommending a delay in in-person voting until June.

"Of course we support whatever they need to do to protect the public health. But we're also hoping that the communities as well as the local election boards will ensure that older adults still have access to the polls to vote," said Joe Franco, vice president of Grassroots at LeadingAge.

Advocates say polling site changes and social media posts urging older Americans to stay at home on Election Day could discourage the influential voting group from heading to the polls.

"There are unfortunately some folks that are saying 'Stay home, why should you go out and vote? It's not healthy to do that,' and I think that's a concern, especially on social media. And we need to make sure that everybody is encouraging those in their family to vote," Franco said.

Polling locations could also face severe staffing shortages. While we don't have data on all 2016 election workers, a majority of those who did report their ages were over 60 years old. Arizona, another state that votes March 17, is preparing for the possibility that poll workers will back out last-minute on Election Day.

Health experts have warned that older Americans need to be especially careful. The CDC says Americans aged 65 and over, as well as those with underlying health conditions, are most vulnerable to the coronavirus. But election experts say there are ways Americans can both exercise their rights and be safe.

"Across the board, there needs to be some recognition that people have to have the ability to vote by other methods than standing in line on Election Day and that would include expanding opportunities for early voting, as well as vote by mail, to allow everyone the opportunity to participate in elections in a health emergency such as what we’re seeing in many parts of the country right now," said Julie Houk, managing counsel at Election Protection.