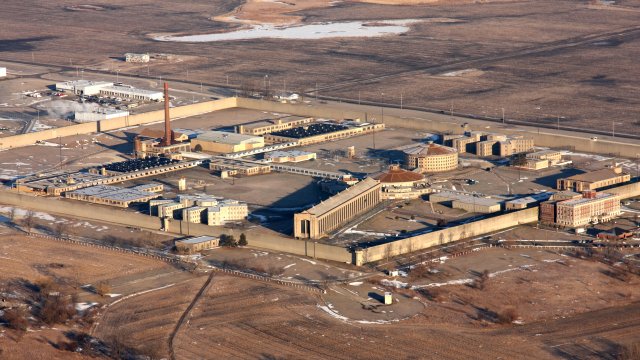 SMS
Coronavirus Cases In Prisons Continue To Spread After Deadly Weekend
By Jamal Andress
By Jamal Andress
March 31, 2020
Both the federal prison system and the Illinois Department of Corrections lost inmates over the weekend who tested positive for coronavirus.
SHOW TRANSCRIPT

It’s only been a matter of weeks since the coronavirus seeped into the country's prison systems, yet two men have died while in custody. One at a state correctional center in Illinois and another in a federal facility in Louisiana.

GOV. PRITZKER: "Tragically we have lost one patient to COVID19 at Stateville Prison."

Stateville correctional center, in Illinois, is the first to confirm a coronavirus-related death in a state prison. The facility has hospitalized 12 inmates, several of whom require ventilators, and has put 77 more in isolation because they are displaying symptoms of the virus.

And at that federal prison in Oakdale, Louisiana, where another prisoner died, at least 30 inmates and staffers have tested positive for coronavirus.

This comes after several organizations, health professionals and activists have called on President Trump and several state governors to release as many people from federal and state prisons as possible.

Alan Mills is the executive director of the Uptown People's Law Center in Chicago which represents dozens of inmates across Illinois.

MILLS: "The longer they're in there, the higher the chances are, they're gonna be a carrier when they come out. ... So really basic stuff like cleanliness, old materials, all of that, along with the typical delays that happen in the prison system, all contributed to being an extraordinarily stretched thin system so that a lot of people were very ill. And some dying because of that medical neglect. Well, that's gonna get a lot worse now."

The Uptown People's Law Center recently conducted a survey of Illinois inmates to find out what conditions have been like since the coronavirus outbreak. Among their findings, Illinois prisoners across the state say they are suffering from major delays in getting health care, and facilities have been short on basic sanitation needs — things like soap, detergent and other cleaning supplies.

MILLS: "Typically in prison, what you're given is one of those little hotel bars of soap for a week. And if you really washed your hands every time you came in contact with something, and you also of course have to use it for showering. Then because they're not getting the other cleaning supplies, many guys use it to do laundry, and also to clean their cells. That bar of soap is not gonna last a week."

But the Illinois Department of Corrections told Newsy in an email that "hand sanitizer, antibacterial soap, and cleaning supplies are being made available" and the department is "closely monitoring our supply levels at each facility."

And while Illinois Governor JB Pritzker hasn't made any executive action aimed at the state’s prisoners, the Department of Corrections says their office is working with the governor to review who is eligible for early release.

GOV. PRITZKER: "An incarcerated person is a person and my administration will not be in the business of claiming one life is worth more than another."

In Illinois, 20% of the prison population is age 50 or older — that's nearly 7,800 inmates across the state.  For Newsy in Chicago, I'm Jamal Andress