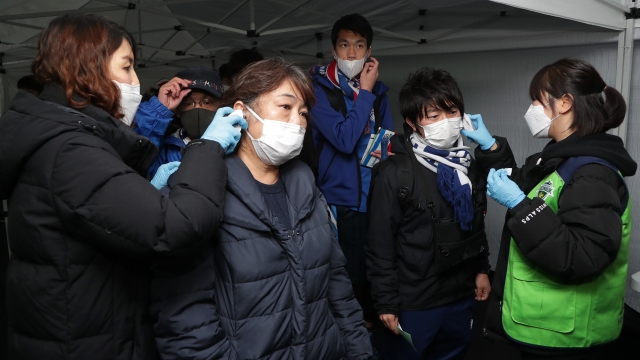 South Korea is seeing a spike in coronavirus cases.

Officials announced Friday that there are now at least 204 confirmed cases in the country. The number of patients infected almost doubled in a day.

This means South Korea has the third-largest outbreak of the virus, after mainland China and the Diamond Princess cruise ship that's docked in Yokohama, Japan.

Globally, almost 77,000 people have been diagnosed with the coronavirus, and at least 2,250 people have died. Two of those deaths have been in South Korea.

The majority of confirmed patients in South Korea belong to the same branch of a religious organization. The church's founder referred to the outbreak as "a devil's deed" in a message run on state media Friday. Meanwhile, the organization told its 200,000 followers to watch its services online while it closes and disinfects its churches nationwide.

To try to prevent the virus from spreading further, South Korean officials are imposing emergency measures on two cities with large numbers of infections. As part of those measures, residents are being asked to stay home as much as possible and wear masks at all times.

People can still travel freely within the capital city of Seoul, but government officials have banned large demonstrations, shut down a large park and temporarily closed thousands of welfare centers.

Additional reporting by Kim Tong-Hyung and Hyung-Jin Kim of the Associated Press. Contains footage from CNN.