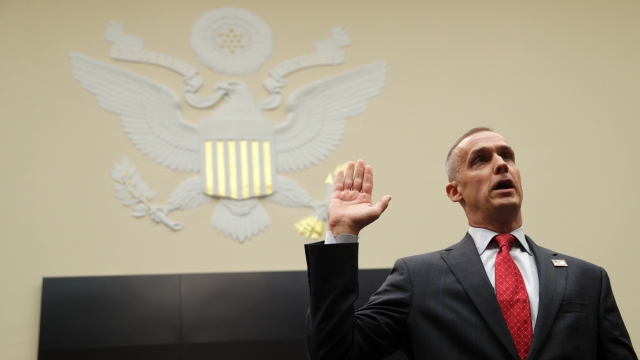 SMS
Corey Lewandowski Testifies Before House Judiciary Committee
By Adam Elrashidi
By Adam Elrashidi
September 17, 2019
Lewandowski said he was instructed not to disclose "discussions with the president or his advisers to protect executive branch confidentiality."
SHOW TRANSCRIPT

"I'd like to start off by expressing my hope that today's hearing will be productive in revealing the truth, both to the committee and to the American people."

That's how pundit and former Trump campaign manager Corey Lewandowski began his testimony before the House Judiciary Committee on Tuesday. Lewandowski was subpoenaed to appear in what Chairman Jerry Nadler designated as an impeachment hearing.

But the hearing was, arguably, anything but "productive." Committee members clashed, with Republican members questioning their Democratic colleagues about its purpose.

At times, Lewandowski appeared combative and responded to questions about the Mueller report with sarcasm.

"I have no obligation to be honest with the media because they're just as dishonest as anybody else," Lewandowski said.

He also side-stepped questions about his involvement with the Trump administration and allegations of misconduct.

Democratic lawmakers continued to press Lewandowski, and some accused of him stonewalling the hearing.

"So what does the president do? He calls you in to do what everyone else wouldn't do. He called you in to do his dirty work in secret, because he knew it was wrong. Well, we will expose the truth. The president cannot hide behind you any longer. And you should be here to be telling you the truth, Mr. Lewandowski, because the truth will set you free and the American people," U.S. Rep. Sheila Jackson Lee said.

But he repeatedly said the White House had instructed him to not disclose "discussions with the president or his advisers to protect executive branch confidentiality."

Two other top Trump aides were also subpoenaed to testify on Tuesday, but the White House reportedly told them not to show up. Lewandowski appeared before the House Intelligence Committee last year but didn't answer questions about the Trump campaign beyond the 2016 election.

Lewandowski denied that President Trump had asked him to "do anything illegal," but he confirmed that the president asked him to pressure former Attorney General Jeff Sessions to limit the scope of the Russia investigation.

He also took time during a recess to tweet about the launch of a website meant to help support a possible Senate run.

Lewandowski's repeated deferral to White House counsel raises a lot of questions about whether his previous work is covered by so-called "executive privilege."

The White House has repeatedly cited executive privilege to block members of the Trump administration from testifying about findings from the Mueller report. Lewandowski, though, has never actually worked for the White House, and Democratic committee members balked at the idea that he's immune from oversight.

The U.S. Supreme Court has long recognized that certain communications with the president are protected by executive privilege. And while the White House can issue these kinds of directions, it cannot ensure compliance from former officials or staffers, especially if they're subpoenaed.