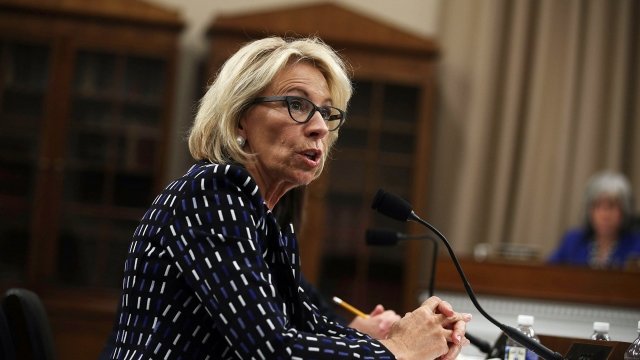 SMS
Here's What Really Happened To The Fine Against A DeVos-Run PAC
By James Packard
By James Packard
August 10, 2018
A candidate for governor of Ohio claims his opponent "refused" to collect a $5.6 million fine from Betsy DeVos and her husband. That's not true.
SHOW TRANSCRIPT

Education Secretary Betsy DeVos is at the center of a little gubernatorial mudslinging in Ohio.

Richard Cordray, a Democrat running for governor, says Mike DeWine, his Republican opponent, refused to collect a $5.6 million fine from DeVos when he was Ohio's attorney general. He made the claim in a Facebook ad last month.

It's true that Ohio fined a DeVos-run political action committee $5.6 million for campaign finance law violations. But it's not true to claim DeWine, as attorney general, refused to collect the fine.

The fine came when the Virginia faction of the PAC run by DeVos and her husband transferred more than $870,000 to the Ohio branch, despite a warning that doing so would be illegal.

Both branches of the PAC challenged the fine in court. The judge threw it out. A subsequent court ruling made the same call.

But during that whole time, Cordray was the one who was Ohio's attorney general. His spokesperson said he didn't collect the fine because it was being litigated almost the whole time he was in office.

Three years after DeWine took Cordray's job, he got a court order to enforce the fine on DeVos' PAC. But by then, it didn't exist anymore, and there was no money with which to pay the fine.

There's been plenty of debate since then about how the situation should be squared and who should be responsible. But for the purposes of this fact-check, the bottom line is this: It's inaccurate to claim DeWine refused to collect millions of dollars from Betsy DeVos.