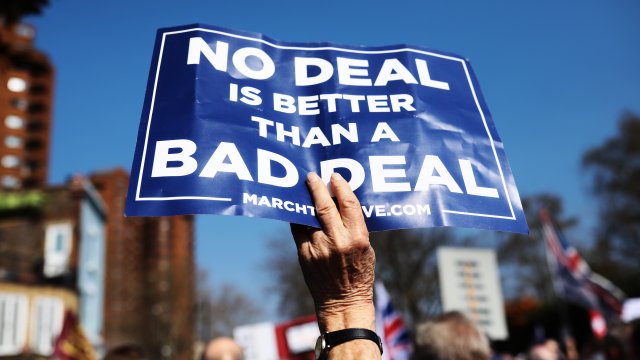 Opposition parties in the United Kingdom are joining together in hopes of preventing a "no-deal" Brexit.

Labour Party leader Jeremy Corbyn met with four other parties to discuss the best ways to avoid this scenario. The meeting comes more than a month after U.K. Prime Minister Boris Johnson promised to take his country out of the European Union — with or without an agreement.

Here are some of the tactics the parties are considering: They could pass legislation to force the prime minister to request an extension for the Brexit deadline. That gives MP's more time to approve a Brexit deal. Corbyn could also call a vote of no confidence against Johnson, although The Guardian reports the parties prefer to try the legislative option first.

Leaked government documents outline the consequences of a no-deal Brexit. Food, medicine and fuel could all be in short supply, along with backups at ports of entry. Cabinet minister Michael Gove tried to alleviate concerns, saying the documents were old and the "worst-case scenario."

The Conservative Party accused the opposition of stalling, adding Johnson will deliver Brexit on Oct. 31. Parliament goes back into session next week.