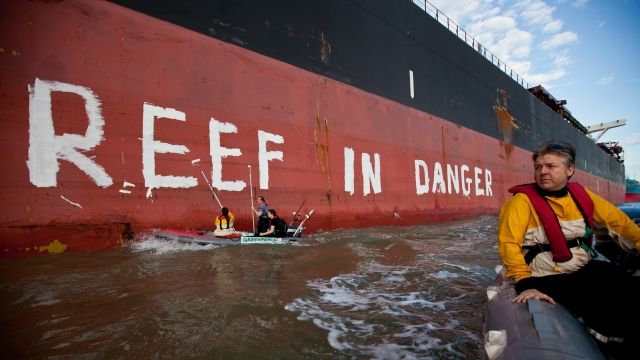 SMS
A Suffering Great Barrier Reef Could Hurt Australia's Economy
By Lindsey Pulse
By Lindsey Pulse
April 13, 2017
Reef loss could cost global economies up to $750 billion, according to a new study.
SHOW TRANSCRIPT

We all know the Great Barrier Reef is dying. And a new study found just how much that could cost Australia's economy.

The Great Barrier Reef supports the livelihoods of around 70,000 Australians employed in tourism and other job sectors.

If it keeps deteriorating at the rate it is now, that could mean a drop in 1 million visitors to Australia. That's at least a $750 million loss in tourism spending and 10,000 jobs.

The reef was declared "terminal" in early April due to back-to-back bleaching events in 2016 and 2017, which cause stress to corals. Events that close together mean corals don't have time to recover.

Researchers emphasize the way to combat the mass bleaching at the Great Barrier Reef and elsewhere is to lower greenhouse gas emissions.

The advice is especially directed at Australia, where emissions continue to increase.

That's not to say coral bleaching isn't affecting other reefs on a global scale. Researchers estimate reef loss puts up to roughly $750 billion at risk worldwide.