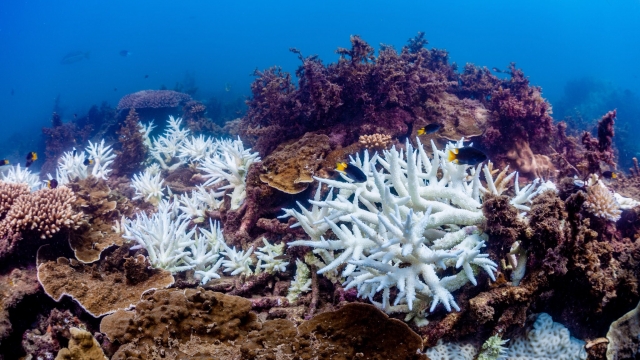 The ARC Center of Excellence for Coral Reef Studies says this is the first time it's seen widespread damage along the entire 1,400-mile reef.

An aerial survey revealed some of the most widespread damage the Great Barrier Reef has ever seen.

The coral hasn't shown bleaching this intense since back-to-back events in 2016 and 2017. What's more, researchers say this is the first time they've seen severely bleached reefs along the whole length of the 1,400-mile reef.

Researchers at James Cook University's ARC Centre of Excellence for Coral Reef Studies and the Great Barrier Reef Marine Park Authority released their data on Monday. They surveyed 1,036 sections of the reef.

Professor Terry Hughes, the director of the ARC Centre, told The New York Times:  "We're surprised by the pace of acceleration in bleaching. We had a 14-year gap between 2002 and 2016, and now in five years we've had three severe events."

Unfortunately, the Great Barrier Reef is still vulnerable, as in the southern region it decreased from 38% to 34%.

More than 90% of greenhouse gases humans create is absorbed by the world's oceans. Hughes said there were record temperatures in February along the reef, and a recent study shows the same held true throughout 2019. Those increasing water temperatures cause stress to coral and the algae that live within them, which results in the coral losing their vibrant colors.

Hughes says this is also causing "a transition from high diversity and lots of species to lower diversity with fewer, tougher species." It also affects the reef fish that hundreds of millions of people rely on for food.

The National Oceanic and Atmospheric Administration's Coral Reef Watch program told the Washington Post that we could one day see reef bleaches as often as once a year and that these major bleaching events could be "early signs" of that.