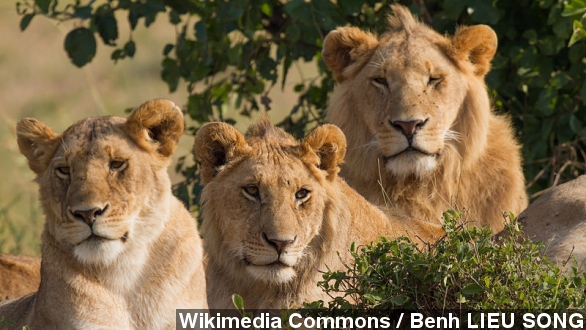 By Matt Moreno
March 25, 2014
The same Copenhagen zoo that received backlash for killing a giraffe named Marius has announced it's killed a family of lions, including two cubs.
SHOW TRANSCRIPT

The same Copenhagen zoo that killed a healthy giraffe last month is under fire again for killing an entire family of healthy lions.

The two lions and two 10-month-old lion cubs were euthanized because the zoo was receiving a new male lion.

In a statement, the Copenhagen Zoo said, ​"Because of the pride of lions' natural structure and behaviour, the zoo has had to euthanise the two old lions and two young lions who were not old enough to fend for themselves." (Via The Guardian)

The zoo said the new male lion would've killed the lion cubs as quickly "as he got the chance" and the parents were reaching their maximum age-limit anyway.

The same zoo received global backlash in February for killing a healthy giraffe named Marius, then feeding his carcass to those lions. The zoo killed Marius because he didn't have the ideal genetic makeup for its breeding program. (Via CNN) (Via The New York Times)

The zoo's CEO spoke with Danish news site Politiken about the killing of the lions and how the backlash from Marius' killing influenced the decision. "I think many people have become more informed of the case of Marius. We have not been scared of Marius, it is academically the most correct."

The Copenhagen Zoo posted on its site about receiving a young male lion, saying that with the new lion and the zoo's current female lion, they'll "form the future lion population."

Not surprisingly, the zoo isn't getting much praise for the killing of these lions.

When news first broke, a Facebook page called Boycott Copenhagen Zoo, which has more than 7,000 likes, said: "Can this realy [sic] be true? How can they get away with this yet again?"

The zoo says attempts to relocate the lion cubs were unsuccessful. The lions' bodies were not fed to other animals. Some animals were used for research while others were discarded.