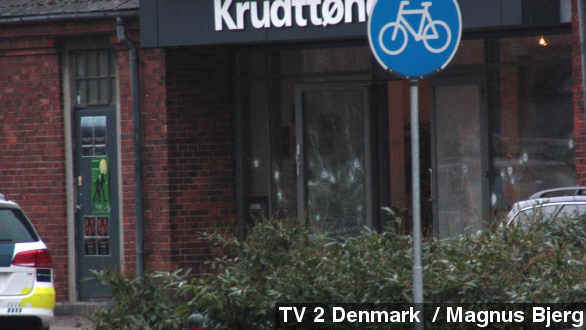 SMS
Copenhagen Cafe Shooting Likely Targeted Cartoonist
By Jake Godin
By Jake Godin
February 14, 2015
A shooting at a Copenhagen cafe is believed to have targeted a controversial cartoonist known for drawing the Prophet Muhammad in the past.
SHOW TRANSCRIPT

A suspected assassination attempt in Copenhagen on a cartoonist known for drawing the Prophet Muhammad left one dead and three officers injured.

The attack occurred at a cafe that was hosting a free speech event. According to Danish police, there were two gunmen dressed in black. Both fled in a Volkswagen Polo which was later found abandoned.

Lars Vilks, a controversial Swedish cartoonist known for a 2007 caricature of Muhammad dressed as a dog, was at the seminar and is believed to have been the target of the attack. He survived after hiding in the cafe’s cold storage unit. (Video via SVT1)

Vilks has been the target of attacks before including a failed plot by an American woman known as Jihad Jane who planned to kill him in 2009.

The French ambassador to Denmark was also present at the seminar and confirmed shortly after the attack that he was okay.

France released a statement expressing solidarity with Denmark and called the attack an act of terrorism. The shooting has been compared to January’s deadly terrorist attack on the Charlie Hebdo offices in Paris. (Video via BFMTV)

The gunmen are reportedly still at large and SAPO, the Swedish security guard firm hired to protect Vilks, says it is stepping up security to help with the situation. The identity of the person killed hasn't been released.