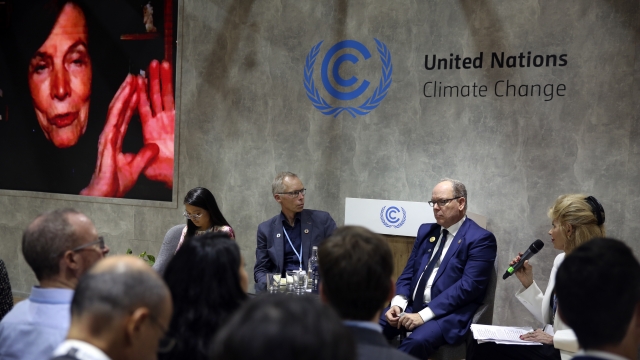 Poorer countries are pushing wealthier nations to pay for climate change disasters, and it's on the official agenda for the first time at COP27.

Leaders from countries around the world are meeting in Egypt for COP27, the United Nation's annual climate change conference.

It's the biggest climate conference of the year, and for President Joe Biden, it's a big opportunity to showcase the climate bill he signed last summer, which includes $370 billion for efforts like doubling clean energy, as in wind and solar.

But the president will also face pressure from developing nations to do more.

"Africa contributes less than 3% of the pollution responsible for climate change but is most severely impacted," Kenyan President William Ruto said.

Despite contributing the least to global warming, poor countries are among the most vulnerable. As a result, they are pushing the world's biggest polluters to foot the bill for the enormous costs of climate change disasters.

The compensation idea, known as "loss and damage," has been steadily gaining traction over the years. For the first time, it's on this week's official agenda at COP27.

While "damage" refers to physical destruction, "loss" refers to what a country loses economically due to extreme weather, things like lost tourism or lost agriculture revenue.

Pakistan is a case in point.

Ahead of this year's conference, leaders and experts have been ringing alarm bells that time's running out to avert catastrophic rises in temperature.

Unprecedented floods this year killed over 1,700 people and submerged a third of the country, partly as a result of human-made climate change. Yet, Pakistan pollutes very little.

"30 billion in damage, unprecedented health crisis, harvests lost, and Pakistan contributes less than .4% of historic emissions," said Inger Andersen, the director of the United Nations Environment Program. "That inequity and that injustice is something that we cannot ignore."

Researchers say the U.S. puts more carbon dioxide into the air from burning fossil fuel in 16 days than Pakistan does in a year.

"Our research shows that there is no veil of plausible deniability that these large emitters can hide behind to say, 'Well, everyone is doing it,'" said Justin Mankin, a climate researcher at Dartmouth College.

The U.S. and other wealthy nations have long resisted calls to admit guilt and compensate poor nations. They fear it could open the door to expensive legal battles, but that's slowly changing.

Meanwhile, on the sidelines, European countries are pledging millions on their own towards new "loss and damage" funds.

"For the lost and damaged of the world, such gatherings are the only hope," Pakistan Prime Minister Muhammad Sharif said.

But for nations on the front line of climate change, like Pakistan, the ultimate hope is a concrete and collective solution decided not on the sidelines, but on the main stage by all the participating nations.