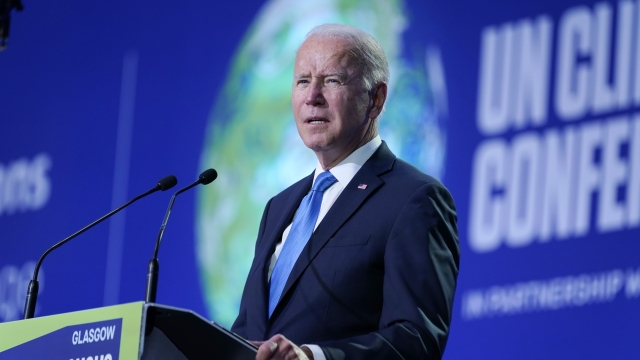 From on-the-pulse PR stunts to straightforward protesting, activists are making themselves heard on Glasgow's streets.

Inside, if day one was heavy on dire warnings about a warming world, day two was a moment for substantive proposals.

"This is part of a new global forest finance pledge of over $12 billion," U.K. Prime Minister Boris Johnson said.

More than 100 world leaders have promised to end and reverse deforestation by 2030. The countries that have signed the pledge cover around 85% of the world's forests.

"The United States will help the world deliver on our shared goal of halting natural forest loss and restoring at least an additional 200 million hectares of forest and other ecosystems by the year 2030. This plan is the first of its kind and taking a whole government approach and working our case with Congress to deploy up to $9 billion in U.S. funds through the year 2030 to conserve and restore forests," President Joe Biden said.

But there were some present who weren't as positive about the president's commitments as perhaps he'd hoped they'd be.

Not least — those representing Indigenous peoples.

"Today, there's no opportunity for the people who live in the jungle, who live in the highest mountain, or the most secluded island from this continent — who are the most impacted by the climate crisis — to be here today and share their voice," Indigenous Minga Calfín Lafkenche said.

Countries have, though, made unprecedented pledges to protect forests and reduce methane. But there are still two large elephants — metaphorically at least — in the room.

The cold reality for President Biden and the other leaders at this summit is that without the leaders from China and Russia, there are significant doubts about how united the world can be in the fight against climate change. China's new emissions target is a carbon copy of the one it made six years ago. Russia has made no new pledges to cut climate pollution for over 10 years.

"Unfortunately, we are not going to see solutions that actually address climate change in a meaningful way coming out of this COP," said Cassandra Smithies with the Global Justice Equality Project.

The president was upbeat as he addressed journalists ahead of his departure. It's been an action-packed visit to Europe. President Biden headed off, as did other global leaders, leaving teams of delegates to concentrate on the details in the search for climate consensus.