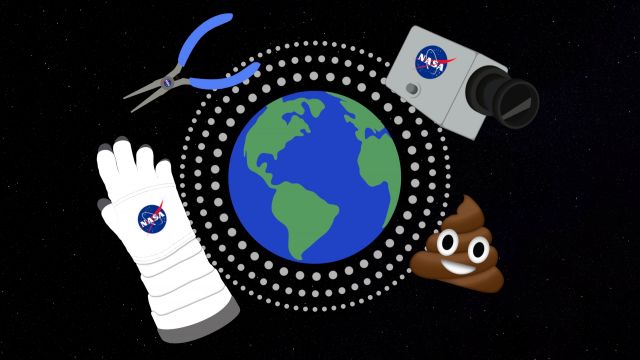 Our space-junk problem is getting a little out of control. Aside from the half million pieces of debris floating around our planet at over 17,000 mph, we've put some weird stuff up there that might not fit your standard definition of junk in space.

For example, there are space burials, but they're not quite like Spock's in "Star Trek." They're more like what actually happened to the show's creator, Gene Roddenberry. His ashes are among the few to leave the planet; his returned to Earth, like most do, but a few don't. Thing is, you can't really scatter ashes up there because we have standards for space cleanliness.

And sometimes, we express ourselves with space junk; a tiny tile of art was rumored to be smuggled to the moon. It has six artists' work, like Andy Warhol's initials. Or did he draw a rocket? Or something else?

It's believed we left something like 96 packets of human excrement on the moon during our Apollo missions. And sometimes, a spacecraft in orbit dumps its space waste, which might look extraterrestrial but is actually just cosmic pee.

The moon has other stuff, too. Just remember it might not always stay how you left it. Apollo 16's Charles Duke left a family picture there, but by now, it's probably entirely black because space radiation will do that. 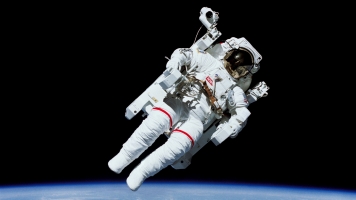 Golfing on the moon is as awesome as it sounds. Alan Shepard, the first American in space, convinced NASA that bringing his collapsible 6-iron on the Apollo 14 mission was worth it. We found out on the moon that a 15,000-yard drive was possible. Yep. Worth it.

Now, if you're doing some work outside a craft orbiting Earth, losing something like a $100,000 tool bag gets a little dicey. From Earth, if you've got the right equipment, it might look like a dot streaking through the sky. But stuff that goes adrift, including escaped space spatulas, comes back toward Earth and burns up in the atmosphere eventually.

So if you're looking for something a bit more permanent, check this out. If scientists are right and in billions of years from now the sun engulfs Earth and all our drifting space junk, we've still got two golden records safely aboard both Voyager probes over 12 billion miles away.

Those records are 12-inch, gold-plated copper discs that have recordings of greetings in 55 languages (just in case aliens speak Latin), songs and sounds (some of them are super creepy) and a slew of epic pictures.

The aliens who find this fragment of our space junk legacy will be super impressed — or incredibly terrified.