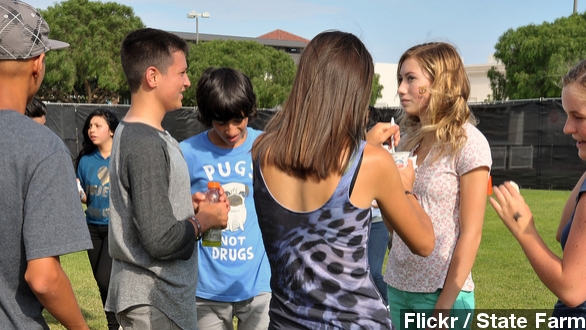 By Jay Strubberg
June 12, 2014
A new study suggests some "cool" kids in high school are more likely to have problems in their 20's with relationships, drugs, alcohol and the law.
SHOW TRANSCRIPT

Looks like "Revenge of the Nerds" was as much a prophecy as it was a cult comedy, because it turns the "cool kids" in school that tried so hard to climb the popularity ladder might not be so cool later in life.

A new study published in the journal Child Development tracked 184 teens in seventh and eighth grade and followed them for a decade. (Via KOB-TV)

The researchers found teens who engaged in, let's say, "Mean Girls" behaviors — like making a point to hang out with popular kids, rebelling and getting a quick start on their romantic lives — were more likely to lose popularity in their 20's, while being more prone to relationship problems, drugs and criminal behavior. And, sorry, Biebz, we just had to use you there. (Via Paramount Pictures / "Mean Girls", ABC)

CNN points to a couple of the study's bigger numbers. Once the "cool" teens became adults, they were 40 percent more likely to use drugs and alcohol and had a 22 percent greater chance of having run-ins with the law.

Study author Professor Joseph Allen calls it the "high school reunion effect. ... The student who was popular and was running with the fast crowd isn't doing as great later on." (Via NPR)

So why do so many of these "cool kids" make a turn for the worse?

Allen speculates that as time went on these teens needed a bigger fix or "more and more extreme behaviors to try to appear cool." Kind of equating "coolness" to a drug in its own right. (Via CBS)

"So maybe when you're the first to be drinking beer at 13 people are like 'Oh, wow! That's so cool. ... But at 23 if you're like, ya know, drinking three six packs a weekend, and people are saying that's not so cool, that's kind of pathetic." (Via CNN)

Iowa State University Director of the Center for the Study of Violence said the results are spot on and parents also shouldn't worry if their child is a loner at an early age because popularity then isn't really all its cracked up to be. (Via HealthDay)

So, the next time you or your 13-year-old feels downtrodden for spending weekend nights buried in books, just remember ... it gets better.