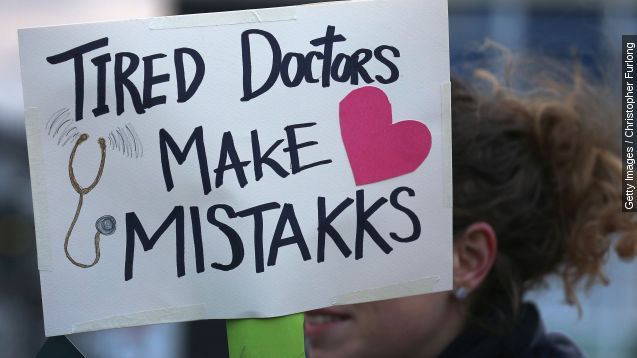 Tuesday was a really bad day to be a patient in England. Tens of thousands of junior doctors in the country went on a 24-hour strike and thousands of planned surgeries and doctors visits were postponed.

Junior doctors range from professionals straight out of medical school to anyone with up to a decade of work under their belt. And they make up a huge portion of the National Health Service in England. (Video via Medicine for the NHS)

The universal health care system provided through the NHS has been labeled one of the best systems in the world. But reports that patients were more likely to die if admitted to hospitals on weekends left the government scrambling to improve weekend care.

The government's solution was to revamp doctor's contracts, tampering with their working hours and pay rates in an effort to bolster seven-day services without increasing spending. But now junior doctors, and the union that represents them, say this plan could cause more harm than good.

"I remember the quality of care patients got from me when I'd been up 72 hours. Patients deserve good doctors. They don't deserve tired, stressed, overworked doctors," a former junior doctor told The Guardian.

The British Medical Association, or BMA, has been in talks with the government since 2014 over the proposed changes. The union says the new plan would prevent junior doctors from achieving promotions and put them at risk for being overworked. (Video via BBC)

The change would offer an 11 percent pay raise, but the premium offered to doctors working on weekends and late hours on weeknights would disappear. The new contracts would also award bonuses based on completed training stages rather than tenure.

Government officials and representatives from the BMA are gearing up for more expected negotiations later this week. If an agreement is not reached, junior doctors have threatened a 48-hour strike starting on Jan. 26, with an all-out strike planned for Feb. 10. (Video via The Telegraph)