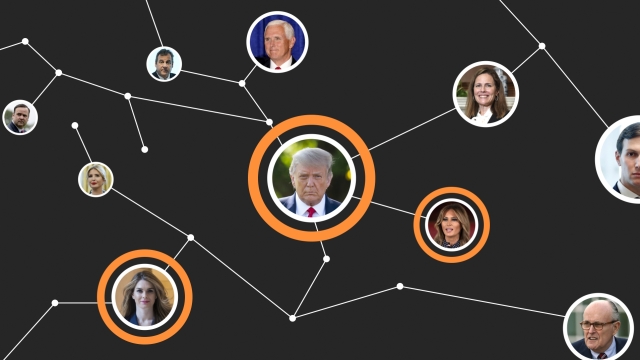 So how did he test positive for COVID-19?

As with any infection, looking at the president's recent travel and interactions — known as contact tracing — is a key step to understanding the potential impacts of the most high-profile case of COVID-19 yet.

"The number of people that potentially could be exposed and at risk of contracting the virus is significant here," said Anne Rimoin, a professor of epidemiology at UCLA's Fielding School of Public Health.

The incubation period for the novel coronavirus is thought to extend 14 days, with an average time of four to five days for people to start showing symptoms.

And five days before his positive test, President Trump announced his nominee for the Supreme Court, Amy Coney Barrett, in a Rose Garden ceremony. About 105 people were in attendance — and the event was not entirely outdoors. So far, 11 people who attended the ceremony have tested positive.

"When the event finished when they're all coming up and hugging and shaking hands and saying congratulations," said Erin Bromage, a professor of biology at UMass Dartmouth. "That's where if I was a betting person, I would be putting my money on where this occurred."

Later that day, the president traveled with White House staff to Pennsylvania for a campaign rally. Over 2,000 people were in attendance — and most were unmasked.

The next day, Sunday, the president held a press briefing at the White House, joined by Chris Christie, Rudy Giuliani and Kayleigh McEnany.

On Tuesday, the president travels to Cleveland for his first debate with Democratic nominee Joe Biden. Both men stand on stage about 10 feet apart. Notably, the president's adult children and his senior staff refuse to wear masks during the debate, in violation of the venue's rules.

On Wednesday, the president travels to Minnesota for a fundraiser at a private home, then an outdoor rally attended by thousands.

Traveling with the president to and from Minnesota are White House staff, including Jared Kushner, Stephen Miller, Dan Scavino, and Trump's top aide Hope Hicks, who feels unwell on the trip back to Washington and isolates herself on Air Force One.

The next day, Thursday, Hicks tests positive for COVID-19. While some White House staff choose not to travel, the president flies to his resort in New Jersey for a private fundraiser, shaking hands and posing for photographs there. (McEnany told reporters Friday that White House operations concluded "it was safe" for the president to travel to New Jersey for the fundraiser.)

The president confirms on Fox News and says he and the first lady are being tested.

Early the next morning, he tweets the results of the tests: positive.

In the fallout, other prominent figures who had contact with the president over the previous few days report their own same-day test results, including Kayleigh McEnany, Kellyanne Conway, Trump campaign manager Bill Stepien, Chris Christie, three Republican senators and RNC chairwoman Ronna McDaniel — all testing positive.

But because tests often don't show infection until several days later, there's still a lot of uncertainty over who else in the president's inner circle or the highest levels of government could have been infected. And the impact on the election just a month away is only starting to take shape.