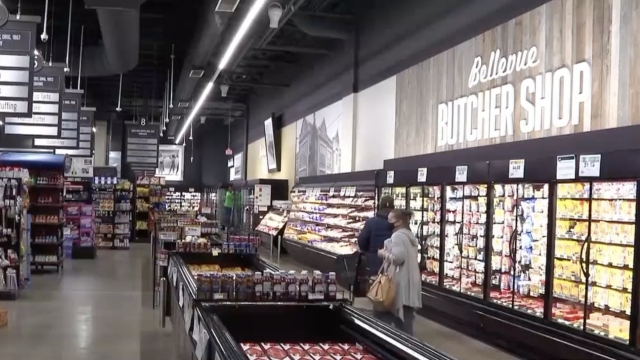 Eating out was one luxury in the crosshairs, as well as attending experiences like concerts and sports. But some are cutting essentials too.

With prices going up, some Americans are changing the way they spend their money.

"Ground beef is up, sausage is up, pasta is up," Christine Zamperini said. "Hundred dollars right there."

A recent Harris Poll for Bloomberg News showed 84% of respondents plan to tighten up the pocketbook in a fight against inflation.

Eating out was one luxury in the crosshairs, as well as attending experiences like concerts and sports. But some are cutting essentials too.

"They're skipping meals, they're reducing foods they would normally buy, they are now shopping at places they maybe wouldn't shop at," said the University of Kentucky's Dr. Alison Gustafson, with the Department of Nutrition and Food Science. "And they're buying less food because they have to."

Others are trying to figure out ways to bring more money into their household budgets.

It can be as simple as finding better pricing.

In Detroit, Gloria Berry is driving to suburban Dearborn to save on gasoline.

"I know their gas is always cheaper than everybody else back there in Detroit, they got the cheapest gas," she said. "Sometimes I go out the way to come get it ... Save a lot of money."

In Florida, homeowner Mark Boos is looking to the sky to help make ends meet. He's gotten solar power to cut his energy expenses in half.

"Well, I looked into it and it seemed very economical," he said. "Worth it down here. We are in the Sunshine State."

Boos had solar panels put on the roof of his St. Lucie, Florida home, which faces south and west, giving him all the power he and his wife need for less money.

"It makes a lot of sense," Mark's wife, Lisa Boos, said. "You're getting free energy — obviously you have to pay for the panels."

In Tampa, desperation drove Wanda Landin to post on a Facebook page for moms, writing she needed a roommate to help pay the rent.

"I honestly found myself in a situation thinking that I was going to be sleeping in my car with my daughter," she said.

Landin's post led her to another single mom, who was also looking for a roommate.

"I feel like having a second mom, in my situation, it's going to be extremely helpful, not just financially, but because we can tackle the kids together," Landin said. "You know, so I feel like even though it's not ideal, I think it's something that I could get accustomed to because I have help. You know, you have help around the house, you have help rearing the children."

In Arizona, pool owner Louis DiCamillo is finding extra cash in his backyard.

"They'll just 'beep, boop' it into this pad lock and open the door," he said.

He charges $45 per hour to rent out his pool on weekdays, $50 on weekends and holidays.

"'Oh wow, this is such a cool backyard,' that kind of excitement — we feed off it, I guess," DiCamillo said.

You can’t stop food shopping, and you can only cut so many corners while keeping your family healthy. Here are some apps to save on groceries.