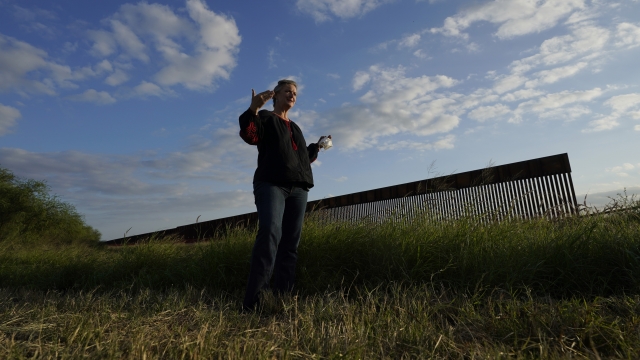 SMS
Conspiracy Theory Is Wreaking Havoc On Texas Butterfly Preserve
By John Mone
By John Mone
February 24, 2022
A Texas business owner is being falsely accused of trafficking children because she fought the border wall, causing distress to her center.

The National Butterfly Center sits along a natural border, the meandering Rio Grande.

And for the center's executive director, Marianna Treviño Wright, that's what draws thousands of nature lovers every year to rural Mission, Texas.

"The Butterfly Center is a place where people come to unwind, to enjoy wild free-flying butterflies, to bird watch, some of them just sit in the blind by the stream, because the sound of the water as you can hear is very relaxing," Treviño Wright said.

But amid the tranquility, Treviño Wright now lives unsettled, after getting a multitude of death threats based on lies and a smear campaign against the center.

A Rumble user named Christie Hutcherson posted, "Why are you more concerned about butterflies than the children being trafficked right behind this center?"

"None of that is remotely true," Treviño Wright said. "We're open seven days a week to visitors, most of whom have very long camera lenses ... to families. We have the sleepover under the stars for Girl Scouts here where we camp out."

The allegations hurled at the center started in 2019 when it stopped the Trump administration's border wall building efforts on its land in court. It aroused the ire of immigration hardliners.

Lowe, with her children in the car and a companion named Michelle, showed up to the center on a quiet Friday and live streamed.

Treviño Wright's son was covering for an employee who was out sick.

"He doesn't normally work here," Treviño Wright said. "I was in the conference room on a call when he interrupted me. He came in with a note and he said, 'Mom, there are two women here, and one of them said she's running for Congress, and the other one says she's secret service.' So, of course, that gets my attention."

Lowe is a Republican seeking to be the nominee for the 9th House district in Virginia. Her social media shows images of her attending the Jan. 6 rally which then turned into an attempt to over turn the 2020 election. In an interview with Newsy, she says she did not enter the Capitol. Her Facebook shows various videos and photos of her journeying across the southwest border looking for evidence of undocumented immigration and child trafficking. None of which she shows in her live streams.

Lowe sent Newsy screen shots of messages directing her to the center, but she did not identify who the reporter was. Treviño Wright says she grew suspicious of Lowe's intentions after her son told her about social media history.

When Lowe and her companion were told to leave, things started to go awry.

"Then they start with, 'So you're okay with the illegals and the babies being raped' and all this stuff," Treviño Wright said. "I told my son... just go ahead and call the police."

Wright says she blocked Lowe;s phone camera and knocked it down, then the two then struggled.

Then Lowe and her companion high tailed it in her car.

Treviño Wright says the recording of Lowe's livestream, which Lowe has since deleted off her own Facebook page, shows the moment Lowe nearly ran over Wright's son.

A spokesman for the Mission Police Department says a misdemeanor assault charge has been referred to the city attorney against Lowe. He added that the department has never been called to investigate child trafficking anywhere near the center. The U.S. Border Patrol does not provide migrant apprehension data by station or zone.

"I never imagined that I would work at a place or be in charge of a place engaged in the horrible things they are lying about us doing," Treviño Wright said.

She says a Hidalgo County Republican advised her about the threats coming her way, so she shut the center down during the conference and now, indefinitely.

She says the threats began in earnest when a doctored image of a dock spread virally online in 2019, after the center sued the federal government and then later when the center filed suit against "We Build The Wall" — a private border wall building effort spearheaded by former Trump advisor Steve Bannon.

"They chose to string us up and swat at us to use us as the straw man for these outrageous and malicious lies designed to inflame their donor base and motivate them to give more money," Treviño Wright said.

The fundraising effort later lead to federal fraud charges for Bannon, for which former President Trump pardoned him. But he did not pardon his partner Brian Kolfage, who repeated false claims about Treviño Wright and the center through various online publications. Kolfage did not respond to Newsy for comment.

"They're trying to incite stochastic violence and terrorism against vulnerable groups for a specific political goal," Binkowski said. "What they're trying to do, again, they're trying to get a bunch of like racist vigilante groups down there to act on what they think are scenes of people being trafficked."

"It has been distressing beyond words," Treviño Wright said. "It has definitely damaged my psyche. It has hurt my relationships. I've lost friends and even relations with family members because they believe this stuff."

She'd prefer that the only rabbit holes people see at the center are literal ones, and not conspiracy theories.