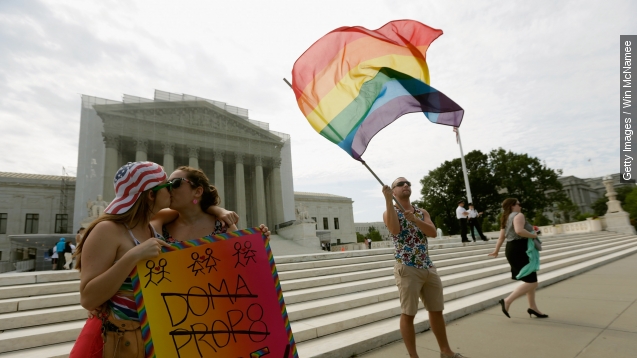 Opponents of same-sex marriage have found another reason to worry about the Supreme Court's latest ruling on the matter: it might send the Internal Revenue Service after churches.

The fear stems from oral arguments on the case back in April, when Justice Samuel Alito asked U.S. Solicitor General Donald Verrilli about a 1983 court case which allowed the IRS to revoke a Christian college's tax-exempt status for banning interracial marriage or dating.

Alito asked, "Would the same apply to a university or college if it opposed same-sex marriage?"

Verrilli answered, "I don't think I can answer that question without knowing more specifics. But it's certainly going to be an issue, I don't deny that."

Verrilli's noncommittal answer stoked fears that, in the wake of the Supreme Court's decision, religious organizations which opposed same-sex marriage could also lose their tax-exempt status. A Time editorial explicitly calling for that right after the ruling came down didn't help matters much.

Conservatives have been particularly wary of IRS overreach ever since the agency revealed in 2013 it targeted conservative political groups for extra scrutiny when they applied for tax-exempt status. The revelation lead to agency director Lois Lerner's resignation.

But the IRS says it has no plans to change its tax exemption rules, and in any case the Supreme Court decision emphasized religious organizations opposed to same-sex marriage will still be protected under the First Amendment.