Conservatives Are Still Blocking Gay Marriage In The South 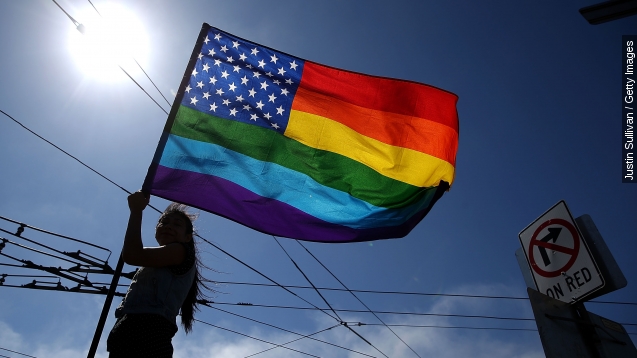 SMS
Conservatives Are Still Blocking Gay Marriage In The South
By Ben Levin
By Ben Levin
June 27, 2015
Even though the Supreme Court has legalized same-sex marriage nationwide, some state officials are still trying to avoid issuing marriage licenses.
SHOW TRANSCRIPT

Same-sex marriage is the law of the land after the Supreme Court's historic ruling on Friday, but that doesn't mean its opponents are going down without a fight.

Across the south, conservative attorneys general, judges, and governors are holding out against issuing marriage proclamations to same-sex couples, citing principles of religious liberty and states rights while waiting for a federal court to explicitly order them to issue marriage licenses.

In Louisiana, presidential candidate and governor Bobby Jindal says the city of New Orleans, where he controls marriage licenses, won't be issuing any licenses to same-sex couples until they're ordered to by a lower court. (Video via C-SPAN)

In Texas, attorney general Ken Paxton warned clerks not to issue licenses until his office gave an order. So far? No order, although many counties in Texas have started issuing licenses anyway. (Video via KXAN)

And in Alabama and Mississippi, it's the same story: Attorneys General telling counties to wait for an explicit order from them or a federal court before issuing licenses

Meanwhile, elected probate judges in two rural Alabama counties are so opposed to same-sex marriage that they've taken their counties out of the business entirely — so no marriages for same-sex couples, but none for straight couples, either. (Video via WDFX)

Of course, organized massive resistance to federal civil rights law is a tradition in the south, from the civil war to segregation under Jim Crow to Brown v. Board, when southern states managed to delay the racial integration of schools for decades after the 1954 Supreme Court ruling.

Today, the resistance is disorganized and minimal — aimed at holding off same-sex marriage for days or weeks, not years.

The Supreme Court has decided that we can get married, so, you know, Mississippi can hold us off for a little while, but..." said a woman who tried to get a marriage license.

"They can't hold us off forever," her spouse said.

The retreat is partly because same-sex marriage opponents have refocused to what they see as the new fight to strengthen laws that protect the rights of religious individuals to refuse service to gay people.

But however that fight goes, their opponents will now be married — in all 50 states.