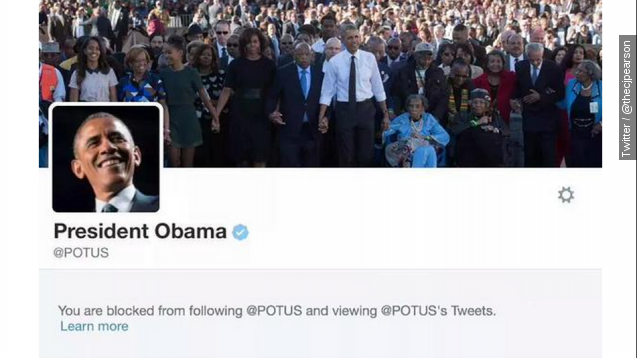 SMS
Conservative Teen Says @POTUS Blocked Him On Twitter
By Jamal Andress
By Jamal Andress
September 27, 2015
A White House spokesperson disputed the claim and said no one has ever been blocked by President Obama's Twitter account.
SHOW TRANSCRIPT

13-year-old conservative YouTube personality CJ Pearson has had quite a month.

"The reality of the situation is you don't get invited to the White House for building a clock. I'm sorry." CJ Pearson said.

As an encore to his viral video criticizing President Obama and Ahmed Mohamed, Pearson is back in the headlines for supposedly being blocked by President Obama on Twitter. (Video via YouTube / CJ Pearson)

Pearson tweeted out this picture with the caption, "Well, this sucks." And as you might imagine, the image went viral.

But along with all the support comes the scrutiny, and soon after the image went viral many started questioning its authenticity.

As with most things, Pearson responded to the situation with a new video.

"A White House spokesman just released a statement that says I was lying about being blocked by POTUS. Well, those allegations are completely fallacious. ... You say you have evidence? Well I look forward to it."

While the White House didn't address the issue any further, other members of the media did.

The reporter also noted that Pearson wouldn't hand over and an original screen grab to theblaze to be examined.

Either way, Pearson says he's done with the issue, posting it's "Time to move on" on his Facebook and uploading a new video entitled #ThugsDontMatter.